Home ›
Our Pet Experts ›
Dr. Donna Spector ›
Be On Guard Against Giardia

Be On Guard Against Giardia 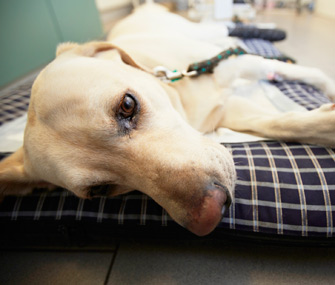 Giardiais a protozoan parasite that can infect the gastrointestinal tract of dogs and is capable of causing diarrhea, vomiting, weight loss and lethargy — although many infected animals show no signs at all. It is common throughout the United States and can cause infections at almost any time of year. Unlike many other infectious organisms, giardia persists longer in the environment when conditions are cool and moist. Most dogs become infected by drinking water contaminated with feces. Giardia then infects the small intestine, and infected dogs pass microscopic cysts in their stool. These cysts can then infect another animal or person if ingested. Giardia cysts are very resistant in the environment, and can live for many months under the correct circumstances. These cysts are a threat to pet health, and giardia is a very common cause of pet diarrhea in the United States.

There is no perfect test for giardia. Giardia is an elusive parasite, and cysts are shed only intermittently from the gastrointestinal tract of an infected dog. A single fecal sample has only a 70 percent chance of detecting an infection. Performing three fecal samples within five consecutive days increases the chance of detection to greater than 90 percent. There are other tests such as the giardia ELISA that can be used with a routine fecal sample to increase the likelihood of a diagnosis to about 95 percent.

If your dog is diagnosed with giardia, he will likely be prescribed medication, and your veterinarian will recommend a follow-up fecal sample two weeks after treatment.

A dog should be bathed on his last day of treatment to eliminate all giardia cysts from his hair coat. Wearing gloves, you should bathe and rinse his whole body as normal and then focus last on his hind end. Do not touch the rest of his body after you have bathed and rinsed around the anus. This will eliminate spreading any remaining giardia cysts around his hair coat. Pet bowls, toys, etc., should be disinfected in either boiling water or in a high-temperature dishwasher. Upholstery and carpeting should be steam-cleaned and allowed to dry. Hard surfaces can be disinfected with a dilute bleach solution (3/4 cup of bleach mixed with 1 gallon of water) or a disinfecting household cleaning product.