Home ›
Our Pet Experts ›
Mikkel Becker ›
Beyond Fetch: Fun Games You Can Play With Your Dog

Beyond Fetch: Fun Games You Can Play With Your Dog

Throwing a ball for your dog over and over again gets boring — for you and for the dog. That is, unless you're our family's 13-year-old, blind Golden Retriever,Shakira. Her heart is set beating by the throw of a tennis ball. She turns down kibble, petting and even the tastiest treats if there's the possibility of the ball being thrown. Being blind doesn't inhibit her fetching a bit. She uses her senses of hearing, touch and smell to her advantage, hunting down the ball over long distances to find it buried in tall grass, beating out the five younger and more physically capable dogs.

Not all dogs are as focused and disciplined as Shakira, though, and play can turn boring fast. My family's American Pit Bull Terrier,Gracie, is one of those dogs. Gracie has the attention span of a 2-year-old at the zoo during naptime. She will run after the tennis ball two or three times, and then all of a sudden, it's as if she cries, "Chipmunk!" and disappears after a smell or something she has glimpsed in the distance. While it would take a seismic event to deter Shakira's attention from a ball, it takes less than a fruit fly landing to distract Gracie and end the game. To keep Gracie's attention without going to the extreme of wearing a hot dog suit with simulated chipmunks on my shoulders takes creative genius and exaggerated excitement levels.

Even for already-focused players like Shakira, the basic games of tug and fetch can be improved upon to increase the level of challenge and further stimulate the brain. For dogs who are easily distracted, varying the types of games and upping their intensity can get even the most lethargic or unfocused dogs performing like seasoned agility pros playing tug at the end of a successful run. Of course, before embarking on any high-energy exercise with your dog, make sure your veterinarian examines him to rule out any underlying health conditions that would preclude him from such activity.

Whether you have a play-crazy canine, a distractible dog or a couch potato, there are games you can add to his play repertoire to challenge his mind and get his body moving.

Here are some fresh ideas to add to your play routine with your pooch.

Fun Games for Your Dog 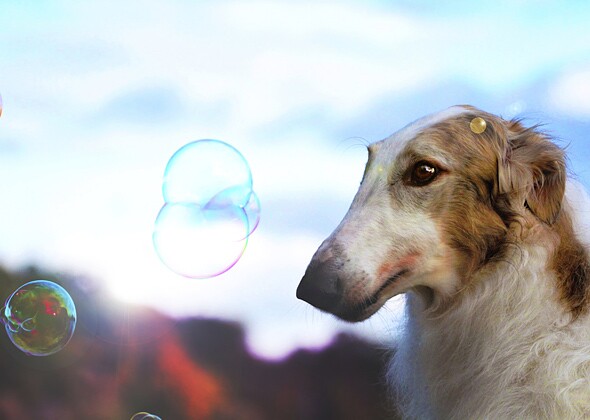 Kids love bubbles. But guess what? Dogs do, too! Bubble-chasing mimics predatory behavior such as preying on small animals like birds or bugs. Dogs are readily entertained by observing, chasing or snapping at passing bubbles. Just be sure to use pet-safe bubbles that are nontoxic if they get near your dog's eyes or are accidentally ingested.

Sticks are the cheapest toy, as they are readily found along walkways and parks, but they come with too high of a price, often leading to lacerations in the mouth or digestive tract perforations or obstructions. The great news is you can still give your dog the delight of fetching sticks with a pet toy shaped to look like a stick. Another variation on fetch is playing inside the home using soft toy animals or the Chase-It by Kong — a pole and line with a stuffed animal attached that can be used with more control than many traditional toys. Rather than throwing continually in a straight line, vary the height, direction and distance the object is thrown to keep your dog mentally primed and challenged while playing.

Frisbee is a distinctly different game from regular ball fetch in that the saucer lingers longer in the air than a ball, ultimately giving the dog a better chance of catching it in midair. The type of Frisbee that's best for a dog varies depending on the individual but can span soft flyers that are easy to grip to extra-tough versions for the most vigorous canine athlete. There's even a Frisbee thrower that allows for a longer launch without having to touch the slobbery disc. 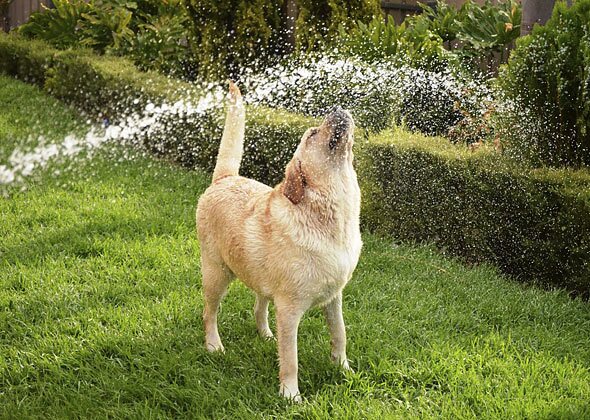 Chasing after water from a moving outdoor hose is easy entertainment for many water-friendly dogs. Some dogs are delighted to join you in a game of chase as they follow you through the sprinklers. There are even dog toys filled with water to keep them cool during the summer months, such as the Hydro Saucer and Hydro Ball. Or, take a field day with your dog to a canine-friendly beach and play chase in the shallow water (away from strong currents) or toss floatable toys in the water for him to chase. Be sure to use a canine life jacket, like Ruffwear. 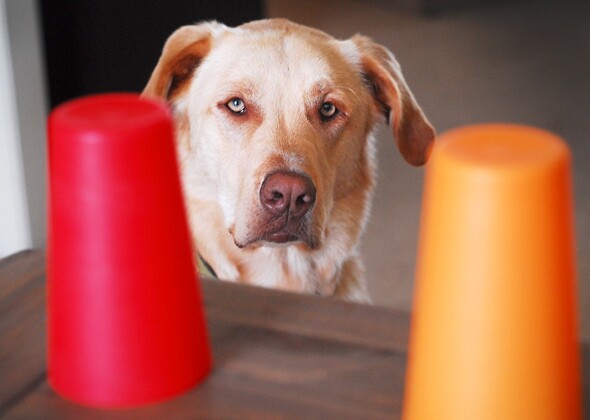 Teach Your Dog to Scent

Start off with two colored containers your dog can't see through. First, train your dog to eat a treat out of a tipped-over container that's lying on its side. Once he is jumping at the chance to eat a treat from the container, flip the container so it's upside down, but hold up one edge so the treat peeks out and the dog can root for it with his tongue. Next, position the container so it partially covers the treat and the dog has to move it slightly with his nose or paws to get to the treat. Then, cover the treat completely with the container. Most dogs will flip it with their nose or paw to get the treat. Once you're at that step, set out two containers, one with the treat underneath. Start with that container closer to your dog to make it easier for him to get it right. As your dog becomes more skilled, challenge him to use his nose to find the treat by moving the containers in line with one another. You can mix the order of the cups to challenge your dog and add more cups as your dog increases in skill. 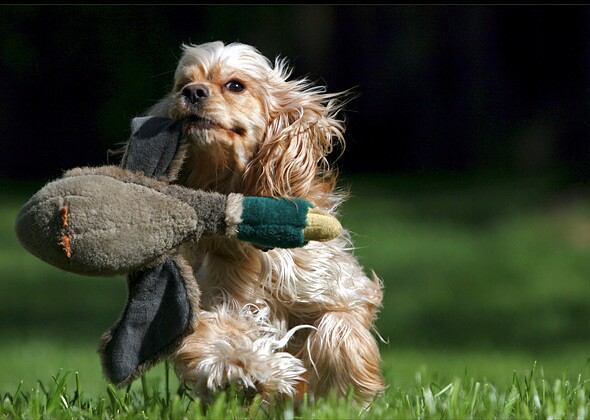 Channel your dog's inner wolf and incite a predatory chase. Tie a stuffed animal to the end of a rope or use a toy like the Chase-It by Kong to evoke a chase response from your dog as he races to catch the toy. You can even create your own "lure course" by clipping a lightweight stuffed animal to the end of a retractable leash and releasing the reel-in button to create a simulated moving animal for your dog to pursue like a sighthound. Get your dog even more pumped for the game by using an animal scent, such as raccoon or deer, that can be purchased at an outdoors store. (Read the label first to make sure it's safe if ingested.) This game is so instinctual that chances are, even the laziest dogs will be moving at Rin Tin Tin speed to take down their prey. 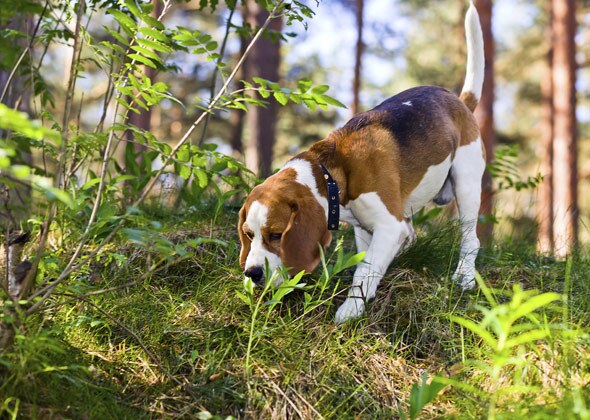 Train Your Pet to Find a Hidden Toy

Discover your canine's proclivity for search and rescue work by hand-placing, rather than throwing, one of his favorite toys in front of him while he watches from a stay position or someone holds him. Then release him to go find the toy. For dogs not as crazy about toys, you can hide a food puzzle or chew bone in the yard for them to find in a similar manner. Once the dog catches on, you can up the difficulty by hiding the toy in harder-to-find places, such as in taller grass or under a bucket, as well as putting the dog in a separate area, such as inside the house, before giving the command to "find it." The game challenges the dog to use his sense of smell, rather than a visual stimulus, to find his target. Then, play a game of fetch or tug as a reward for finding the hidden gem. 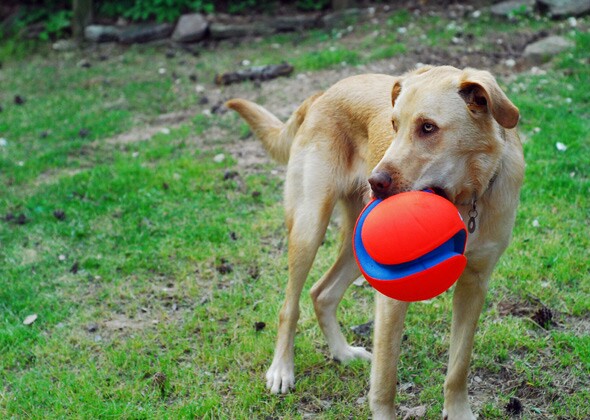 The Chuckit! Kick Fetch ball lets dogs get in on a variety of activities with people — including soccer action. The dog can pursue a moving ball that you kick or even pick up the soft ball with his mouth. 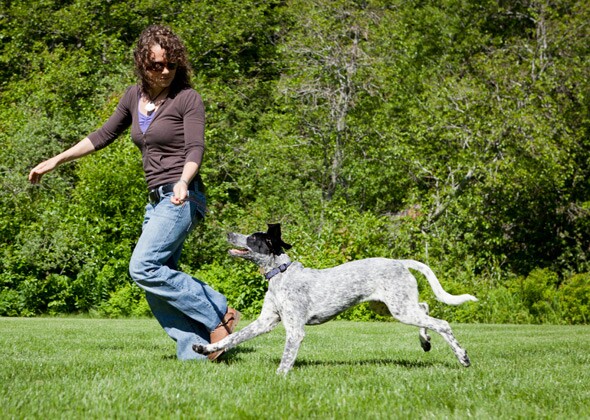 Play With Your Dog in Chase-like Fashion

Heavy hand wrestling with dogs is not recommend in most situations, as the dog often becomes overstimulated and mouthy behavior can inadvertently be rewarded. A better alternative is to act like a canine play partner and "play bow" by putting your hands down on the ground and then jumping back — or, for more energetic dogs, simply bending over slightly at the waist and making a swift movement backward or to the side. Then, trot or run in the other direction. Once your dog catches up, stop and reward him with praise or a game of structured tug.