Home ›
Our Pet Experts ›
Mikkel Becker ›
Can I Teach My Dog Not to Dash Out the Door?

Can I Teach My Dog Not to Dash Out the Door? 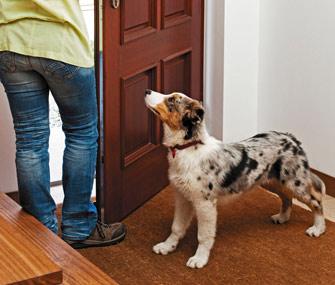 There's nothing quite like the fear that grips a dog owner when she opens the front door and — bam! — before she knows it, her beloved dog has bolted past her.

I relate to the terror and frustration a pet parent experiences with a dog that habitually escapes, because my first dog, a Wire Fox Terrier named Scooter, was an escape enthusiast from puppyhood.

Every time Scooter burst through the door felt like it might be the last time I saw her. One time I even witnessed her running directly into the path of an oncoming car. I screamed what must have been a fear-gripped scream, because she turned her head to look at me midstride, and the car's tire ran, at that exact moment, over the spot where Scooter's head otherwise would have been.

Like Scooter, many dogs treat a door as if it were an escape hatch, rather than a boundary. For some canines, a door is only a door; for others, it's an opening with access to freedom, whether it's the car door or a fence gate. The behavior is extremely dangerous, as the dog can be injured, ingest harmful items, become lost, get stolen or worse.

Why do dogs bolt in the first place? In some cases, sex hormones — specifically, testosterone in intact male dogs — can be a factor. For this reason, neutering can help reduce roaming behavior in some dogs.

But not all dogs that dash are intact males, meaning there's more to the equation than hormones for many pooches. The breed and personality of the dog also can account for the behavior. Innately, some dogs prefer to stay closer to people, while others are less inhibited about venturing farther away on their own. Dogs bred to be independent and work at a distance, such as some terriers and many hunting breeds, are often more likely to dash and run than dogs bred for closer contact with humans, such as those bred for companionship. Dogs bred to hunt and track, such as scenthounds and sighthounds, can have a propensity to bolt as they catch smells or sights that lure them to give chase, often over great distances.