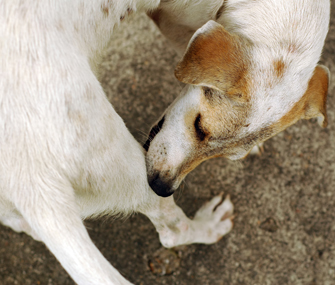 Over the past few years, I have noted an increase in the number of cases of canine sarcoptic mange in the various practices I work in. Also known as "scabies" or simply "mange," its prevalence seems to be increasing, especially in the northeastern United States. I have found that many clients, however, seem to be unaware of this relatively ubiquitous disease.

Sarcoptic mange in dogs is caused by a tiny mite known as Sarcoptes scabiei. These tiny pests, which are related to spiders, can only be viewed with a microscope and are carried by foxes, coyotes, wolves and other dogs. Since the mites can survive for a few days in the environment, dogs can easily be exposed to them while at a kennel, groomer’s, day care facility, dog park or any other high-traffic area that has been infested. Dogs can also be exposed to mites in the great outdoors — in your backyard or while on outings.This isbecause the more common wild canids — foxes and coyotes — are thought to be an important reservoir for sarcoptic mange in the environment. While many reports state that the red fox population is dwindlingbecause of the growing presence of coyotes, there are manyareas where the reverse seems to be true and foxes are more prevalent.The key point, however, is that whether carried by coyotes or foxes, scabies remains a growingconcern, and its presence should be suspected in likely cases.

When Should I Suspect My Dog Has Mange?

Sarcoptic mange is extremely itchy, with clinical signs beginning a few days to a couple of weeks after initial exposure. The itching is caused by the mites actually burrowing under the skin to lay eggs, where they are believed to live on skin particles and secretions. If left untreated, the adult mites will rapidly multiply and the itching will spread. Obvious skin lesions will become visible within 30 days of initial exposure. The mites also can be transferred to humans and other wildlife. In humans, they can cause a rash of small, raised red bumps.

The hallmark sign is a recent onset of progressively worsening and unremitting scratching, licking and chewing. Very few disorders are as itchy as mange. The areas of the body most often affected are:


A red rash also may develop over the chest, abdomen, hocks, armpits, face and other regions. As the condition progresses, thick, yellow crusty patches indicating infection may develop at any of the affected areas. Mange is progressive and won’t respond to traditional anti-itch therapies such as corticosteroids and antihistamines.

How Will MyVeterinarian Diagnose Mange?

Skin scrapings viewed via microscope are one way to detect the presence of mites. But since these tiny mites can be visualized only 30 percent to 50 percent of the time — giving them the nickname scabies incognito — skin scrapings can be unreliable when attempting to diagnose the cause of the problem. That’s why, if mange is strongly suspected, it often makes sense to simply begin therapy right away even if skin scrapings are negative. Response to therapy is often the best confirmation of diagnosis.

How Is Mange Treated?

There are several treatment options available to your veterinarian for managing sarcoptes mites. The easiest and most effective options include one of several topical spot-on flea products that are also effective against sarcoptes mites, or an injectable medication that can kill the mites. Interestingly, much of this constitutes off-label usage of these products. Nevertheless, they represent the most commonly used treatments to combat mites. Antibiotics and/or anti-yeast medications also may be needed if co-infections have developed. Corticosteroids and antihistamines can be used in an effort to reduce the itching.

All animals suspected of having come into contact with susceptible animals ideally should be treated to avoid infection or reinfection. Since sarcoptes mites can survive briefly in the environment, all of an infected pet’s bedding, brushes, collars, etc. should be disinfected as well. A solution of warm water and bleach can be used to scrub hard surfaces. Washable items should be laundered in a bleach and detergent solution. Anything that cannot be disinfected should be thrown out.

Once managed, the prognosis for sarcoptic mange is excellent.