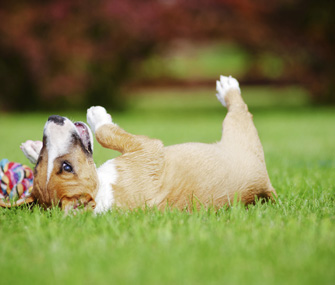 Thinkstock
If your puppy's on his back, it could mean he's relaxed or that he's scared and submissive.

It's pretty obvious what a puppy with a wagging tail, wiggling body and licking tongue is saying when he comes to greet you — but not all puppy language is so easy to decipher. If he's making low "grrrr" sounds when you're playing tug, is he becoming aggressive? If he rolls onto his back, is he scared? It all depends on the context in which he's doing these behaviors and the other signals his body language is putting out.

Common Signs, What They Mean

The more you understand what your puppy is trying to tell you, the better you can work to create a happy household for both of you. And you might as well learn it now; he’ll probably keep this same basic body language throughout his life, just adding a few more messages to his repertoire as he matures.
More on Vetstreet: