Home ›
Our Pet Experts ›
Colleen Oakley ›
Does Your Pet Need to Go to Fat Camp?

Does Your Pet Need to Go to Fat Camp? 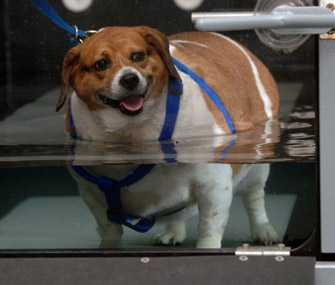 It should come as no surprise to most people that America’s obesity epidemic has, well, grown exponentially in the past few decades. But the battle of the bulge isn't limited to humans. According to a recent study conducted by the Association for Pet Obesity Prevention (APOP), 54 percent of dogs and cats today are considered either overweight or obese.

“A correlation can actually be drawn between the human obesity epidemic and pet obesity,” says Dr. Jules Benson, BVSc MRCVS, a veterinarian at the Doylestown Animal Medical Clinic and a member of the Board of Trustees for the Pennsylvania Veterinary Medical Association (PVMA). “Since we’re responsible for our pets’ nutrition, it’s reasonable to believe that some of the causes of obesity are passed from owner to pet, like a sedentary lifestyle and a lack of portion control.”

And the consequences can be just as dangerous for pets. “Arthritis, orthopedic disease, diabetes and cardiac disease can all be exacerbated by excess weight,” says Dr. Benson.

Weight-Loss Camp for Fido (or Fluffy)

Just like the multibillion-dollar weight-loss industry for humans, the market is responding to the problem of pet obesity with a growing number of weight-loss camps for animals across the U.S.

Is it time to sign up your own furry family member?

Well, it depends on a number of factors. First, you need to determine if your dog or cat is obese. This can be trickier than it sounds, given that the APOP study found that 22 percent of dog owners and 15 percent of cat owners characterized their pet as being a normal weight — despite the fact that the animal was actually overweight or obese.

A better way to tell? “Run your hands over your pet’s sides,” says Dr. Benson. “You should be able to easily feel the ribs beneath the skin. If there’s quite a bit of ‘padding,’ your pet may be overweight.” Of course, you’ll want to ultimately check with your veterinarian, who can best determine what your pet's ideal healthy weight should be based on such factors as age and breed.

If your cat or dog could stand to lose a few pounds (or more!), your veterinarian will run tests to “make sure that there is no underlying medical reason behind the obesity,” says Dr. Ernie Ward, the founder of APOP and the author of Chow Hounds: Why Our Dogs Are Getting Fatter.

Once that's complete, your vet can devise a healthy diet and exercise plan for you to adopt at home. “Sometimes it’s as easy as keeping a food diary,” says Dr. Ward. “Write down everything you put in your dog or cat’s mouth for a week.” In doing so, you may become aware of just how many table scraps and extra treats you’re unknowingly doling out, contributing to the problem.

If you’re still not seeing progress, it might be time for a more drastic intervention — like pet fat camps.

“They’re great for owners with no willpower or self-control,” says Dr. Ward. “The ones that can’t put down the cookies or treats, so to speak.”

Dr. Benson agrees. “Pet fat camps work for many of the same reasons that Weight Watchers works for people,” he says. “Not only is it a morale-supporting group effort, but having other people involved, and making a commitment to a group, puts positive pressure on you to live up to that commitment. Without that support, it can be more difficult to fully adhere to a plan.”