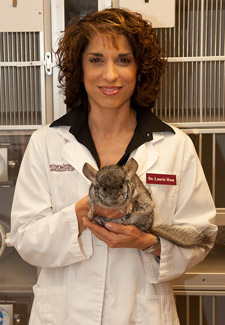 Dr. Laurie Hess is one of approximately 150 bird specialists in the world board-certified by the American Board of Veterinary Practitioners. After graduating from Yale she received her veterinary degree from Tufts. She completed an internship and residency in avian and exotic animal medicine at the Animal Medical Center in New York City, where she was head of the Avian and Exotic Pet Service. In 2010 she opened the Veterinary Center for Birds & Exotics, in Bedford Hills, N.Y., where she exclusively treats birds, ferrets, rabbits, rodents, reptiles, amphibians, hedgehogs, sugar gliders, pot-bellied pigs and other exotic pets.

A native New Yorker and former competitive gymnast, Dr. Hess loves to work out and never misses a spin class at the gym. She lives in Westchester County, N.Y., with her husband, two children, two parrots, two canaries and four cats.