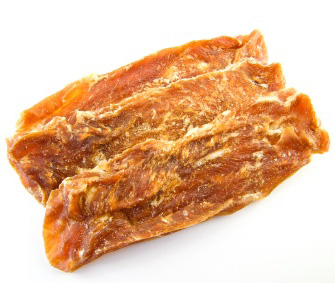 Once again, an increasing number of complaints about sick dogs have been connected to chicken jerky imported from China, prompting the U.S. Food and Drug Administration to issue its third advisory since 2007.

The FDA previously warned about these products (also called chicken tenders, strips or treats) in 2007 and 2008. The 2007 warning was issued after nearly 100 dogs got sick.

According to the FDA, a urine test of canines sickened by eating the treats could indicate increased glucose (Fanconi syndrome), and blood tests could show indications of kidney failure. Some dogs have died, the FDA reports, but most seem to recover.

The most recent warning states that the “FDA is advising consumers who choose to feed their dogs chicken jerky products to watch their dogs closely for any or all of the following signs that may occur within hours to days of feeding the products: decreased appetite; decreased activity; vomiting; diarrhea, sometimes with blood; increased water consumption and/or increased urination. If the dog shows any of these signs, stop feeding the chicken jerky product. Owners should consult their veterinarian if signs are severe or persist for more than 24 hours.”

Brands that use chicken imported from China include Waggin Train, Canyon Creek Ranch and Milo’s Kitchen. China has long been under fire over food safety for both pet and human food. More than 100 brands of cat and dog food were recalled when at least 14 pets died after ingesting grain from China that was tainted with melamine, a chemical that can make products appear to have more protein.

Milo’s Kitchen, made by Del Monte, has the following note on its Web site regarding the FDA and veterinary warnings about dog treats:

“The FDA statement was presented as a cautionary warning. As with any pet product labeled as a treat or snack, chicken jerky products should not be substituted for a balanced diet and are intended to be used occasionally and in a recommended quantity. We always recommend that, as a guideline, no more than 15 percent of a dog’s daily caloric intake should be comprised of treats. Owners of small dogs must be especially careful to limit the amount of treats fed, since even a single treat could make up more than 15 percent of their diet …”

In its warning, the FDA states that it has not conclusively connected the treats to the illnesses, but the agency will continue to investigate the situation. Veterinarians and consumers are asked to report suspected pet illnesses online at fda.gov/petfoodcomplaints.

Mitch Lipka is one of the most widely read consumer reporters in the country. He's written for The Boston Globe, Philadelphia Inquirer, Consumer Reports and AOL. He was the 2010 winner of the New York Press Club award for best consumer reporting online. Mitch has a dog and two cats.