Home ›
Our Pet Experts ›
Dr. Mary Fuller ›
From Their Fox-Like Looks to Their Naughty Natures, Here's What I Love About Shiba Inus

From Their Fox-Like Looks to Their Naughty Natures, Here's What I Love About Shiba Inus 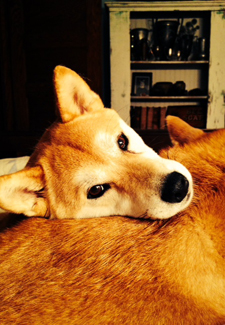 Like most people who fall for Shiba Inus, I’m a sucker for the dogs’ foxlike appearance: the velvety fur, the alert ears, the dark chocolate eyes. And, like other Shiba owners, I’ve come to accept that obedience is not their strong suit.

I knew I was in trouble when, as puppies, my two Shibas received a personally addressed thank-you card from the local furniture restorer. After ringing up the charges for repairing the antique dining room table base, Morris chair and bed footboard the dogs had cut their teeth on, he felt compelled to pen his appreciation. “Keep up the good work,” the note read.

Then there was the time my friend hung his jacket over my dining room chair and my Shiba Arlo nosed through the pockets. When the friend opened the backdoor to let my dog out, he noticed — too late — that Arlo had his wallet clenched in his mouth as he dashed into the snowstorm.

In the farthest corner of the yard, Arlo shook his head, spraying credit cards into the snowdrifts around him. (After a half-hour hunt in the snow with flashlights and brooms, we located all the contents except for my friend’s driver’s license.)

But it’s not just their quirky — and naughty — personalities that make Shibas so compelling.


As Clean as a Cat

Shibas are often likened to cats because they’re fastidiously clean. As puppies, my dogs essentially potty-trained themselves. On walks, they’ll circle a mud puddle rather than get their paws dirty. And though they do like an occasional roll in the dirt, by the time I’ve run the bathwater, they’ve licked themselves spotless.

It’s a good thing my dogs are so clean, because it somewhat makes up for the enormous amount of hair they shed. In addition to their regular shedding, twice a year, they “blow coat,” with clumps of soft, downy fur dropping out in handfuls.

When I owned two cream Shibas, I gave up trying to get their white hair out of my car’s upholstery. At one point, my brother borrowed my car, and when he turned on the air conditioner, he suddenly had white hair swirling around him. He said it was like driving in a giant snow globe.


The Closest Thing to a Wolf

Out of 85 dog breeds that had their DNA studied by scientists, the Shiba Inu turned out to be genetically closest to the wolf — a finding thatmay explain the breed’s independent nature and propensity to run.

These escape artists are not for those who don’t have fenced-in yards or don’t expect their dogs to turn deaf ears on their pleas to “come.” This is why I am occasionally spotted circling the block in my nightgown, shaking a bag of shredded cheese or squeezing a squeaky toy like a crazy old lady.

This ancient breed comes from Japan, where it was used to hunt birds and small game in the mountains. It’s an instinct the dogs never lost — so much so that I no longer hang a bird feeder in my backyard.

My two Shibas tag-team the wildlife outside, the younger one catching birds, mice and one unfortunate squirrel, and the older one swallowing them, despite all the arm waving and protestations from me.


The Silent Type (Except for the Scream)

My dogs rarely bark. Not for the mailman or the UPS delivery guy. Or when my brother brings his dogs over. Not even when they want to come in from outside — they’ll just sit patiently on the back steps until I open the door. But all I have to do is bring out the nail trimmer and I’ll be treated to the infamous Shiba Scream, which is a particularly piercing vocalisation of displeasure.

I’ve accepted the fact my dogs will never win obedience awards. But their strong-headed personalities keep my life interesting. And there’s no better welcoming committee than these two little fox faces, and for that I am forever grateful.