Home ›
Our Pet Experts ›
Samantha Bartram ›
Getting to Know the Groundhog

Getting to Know the Groundhog 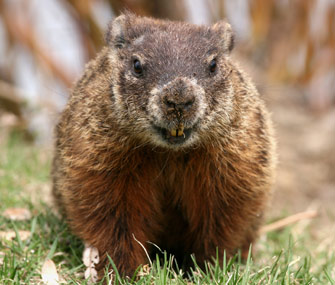 “This is one time where television really fails to capture the true excitement of a large squirrel predicting the weather.” —Phil Conners, Groundhog Day

Our friend Marmota Monax — better known as the groundhog — is one of the most legendary rodents in North America. Roaming a swath of territory extending from Alaska to Alabama, the humble groundhog is held responsible each year for predicting the start of spring (or the end of winter, depending on your perspective). Pennsylvania’s Punxsutawney Phil is perhaps the most well-known meteorological marmot; each year, on Feb. 2, tens of thousands of people wait patiently for the sleepy ground squirrel to emerge from his burrow and either lament the cloudy day or be startled by his own shadow. The former is said to mean an early spring is imminent, while the latter supposedly signals six more weeks of dreary winter weather.

Although the groundhog finds himself in the spotlight once a year, he's not hard to find the other 364 days. Ubiquitous in the backyards, highway medians and fields of nearly half the United States and most of Canada, groundhogs can often be a nuisance to homeowners and farmers.

It’s fairly easy to tell if a family of groundhogs has taken up residence on your property. Often they make little effort to conceal themselves — groundhogs can commonly be found out in the open, sunning themselves in a patch of grass or atop a fence post. Or they may leave clues behind, such as chewed wood or plants, with tooth markings that are similar to that of a rabbit, but larger.

Groundhogs, like most pets and people, are active during the day and retreat to their burrows for a good night’s sleep. But the groundhog takes his sleep more seriously than we do: The bristly herbivores are true hibernators, meaning they bulk up in the fall and sleep from roughly October to March. While the groundhog will occasionally snack on a grub or other smallish insect, for the most part they rely on grasses, fruits and nuts to give them a rich fat reserve that will last through the coldest months of winter.