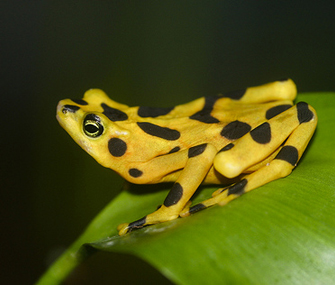 Today is a special day for frogs in Panama: It's the fourth annual Golden Frog Day, first officially declared in 2010 to honor Panama's national animal and celebrate the country's amazing biodiversity. But the frogs of Panama are in need of more than just a party. They've been devastated by a disease caused by the chytrid fungus that's threatening amphibians all over the world. In fact, the last time a Panamanian golden frog was seen in the wild was in 2008.

The good news is that on this Golden Frog Day, there's something to celebrate: 44 baby frogs have been bred in Panama by the Panama Amphibian Rescue and Conservation Project, a group of organizations that have been working together since 2009 to address the amphibian crisis in that country.

Bringing the Frogs Back

Golden frogs have been bred in captivity since the 1990s, but this is a milestone for conservation efforts in their native land. "In the U.S. they're doing very well, but it's been a while since we've managed to breed them in Panama," says Brian Gratwicke of the Smithsonian Conservation Biology Institute. "So we're really excited to be able to put this out for Golden Frog Day."

These frogs came from eggs laid in November 2012, but the project has waited to announce them not just to coincide with the occasion, but because growing up is a complicated business for a frog.

"We wanted to make sure they metamorphosed," says Gratwicke. "That's a really difficult time in a frog's life. They're basically changing their entire body plan, sucking in their tails and filling out the legs. It's a massive reorganization of the body."

It's a nerve-wracking time for frog conservationists too: You've gotten your frogs to lay eggs and have cared for the tadpoles, and now you have to hope they make it through the transition to their adult form. And it's all more difficult in a developing country with less reliable power to keep the systems running that maintain crucial water quality.

The captive breeding effort in Panama started in 2007 with the opening of the El Valle Amphibian Conservation Center, run by the Houston Zoo. There are now two captive breeding facilities, and the goal is to extend efforts to 20 species that are at high risk. "The golden frog is a flagship species," says Gratwicke. "It encapsulates the entire story and the challenge that's being faced by all 200 species of amphibian in Panama."

With the golden frog's national significance and striking beauty to attract attention to the cause, the hope is that they will be able to help other amazing but less-known species. One that Gratwicke thinks is especially cool is the rocket frog.