Grieving for Pets Comes of Age — but Slowly 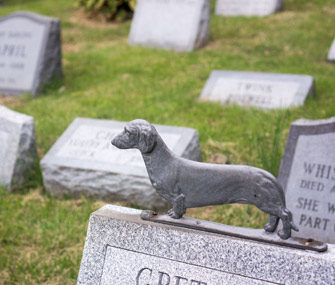 When my sister’s dog passed just over a dozen years ago, she grieved openly and fiercely. The extent of her grief was, in part, the result of the especially grim circumstances. Her boy’s death had been particularly difficult.

She’d adopted him as a pup, the only survivor from a litter of frozen babies dumped by a wintry roadside in upstate New York. He’d been normal for only a few months, after which he developed a seizure disorder the veterinary neurologists at Cornell had presumed to be epilepsy.

Just two years later, however, it became clear that Hudson’s disorder was worsening. Independent of his seizures, he appeared to act in ways that, to my sister, seemed schizophrenic — he'd be happy and healthy one moment, dark and aggressive the next.

Ultimately, it was not a condition that could be controlled. Hudson's quality of life — and that of his family — was rapidly deteriorating. Euthanasia was elected.

It happened at home, under the best possible circumstances. Lakeside, in his backyard, under his favorite tree, he was laid to rest.

A Hard Death to Rationalize

It was a terrible sort of grief that ensued. My sister could not come to grips with how strangely and sadly Hudson not only came into the world, but also how he had to die.

Others in our family had passed on by that point in her life, but theirs had been timely, understandable deaths. She’d had no experience with the loss of a young, otherwise healthy friend and family member who couldn't be significantly helped by modern medicine. The fact that she’d fought so hard for his survival — years of visits to faraway specialists, among numerous other personal sacrifices made on his behalf — made it all the worse to bear.