Home ›
Our Pet Experts ›
Mikkel Becker ›
Help! My Dog Lunges at My Face When We Play

Help! My Dog Lunges at My Face When We Play 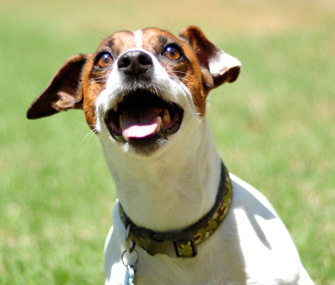 Q. Can I teach my dog not to lunge at my face? She does this when we're playing, but it can be painful sometimes.

A. Lunging and mouthing are typical ways for dogs to play with each other. This play behavior is especially common in puppyhood, but can continue into adulthood. Certain breeds are more likely to jump up toward the face during play, rather than focusing on the paws, chest or side as other breeds may do.

Lunging at the face can be dangerous and frightening, not only for you but especially for other people, particularly if there is any possibility that the behavior is not play-related. If you suspect that your dog’s behavior is aggression- or fear-related, seek professional help immediately, starting with your veterinarian.

Even if your dog is lunging and mouthing only in play, the behavior can be surprising and painful. Behavior that starts out as play can escalate into something more problematic over time. The way you respond to your dog when she lunges and mouths can have a major impact on whether the behavior escalates or stops.

I recently worked with a dog who started out lunging and mouthing at his owner in play. The owner's response to this behavior was to scream, throw her arms up in the air, and push the dog down every time he jumped up to mouth her. As a result, his excitement level and the firmness of his mouthing increased over time. While the dog wasn’t aggressive, he was certainly overstimulated, and the situation was becoming more serious. Jumping up and mouthing had become his go-to response whenever he was overly excited or anxious. I worked with the owner to teach her dog alternative behaviors to replace the jumping and mouthing, which also helped him learn to settle himself when he was overstimulated.

For your dog, most of the fun of lunging and mouthing at you in play comes from your response. Pulling back, screaming, and fast movements, such as pushing your dog down, are all behaviors likely to get her even more excited. The more understated and dull your reaction, the less fun the behavior becomes. If your dog jumps up or mouths your skin, freeze in place. Slowly cross your arms and look away until your dog calms down. Instead of reacting to the behavior you want to eliminate, lavish praise and rewards when your dog is playing appropriately.

Teach Your Dog to Play Nicely

Your dog is much more likely to get overly excited when you’re down at her level, either sitting, kneeling or bending over, which means that it is important to train her to be calm when you’re on her level. Sit in a chair or on the ground and ignore all her attempts to jump, mouth, bark or be rambunctious. As soon as she begins to act calm, either by sitting or laying down, immediately reward her. You can reward with praise and petting or food treats, depending on what your dog finds most enjoyable. When she settles down, mark with a “good” and give your reward. Reward periodically as long as she remains in her settled position. If your dog stands up or gets excited, stop the interaction by freezing in place and slowly crossing your arms and looking away. Stay in this position and ignore your dog until she settles again. As your dog learns to settle, practice kneeling, bending over, sitting on the couch, sitting on the floor, or getting into any other position where you’re close to her level.