How Hamsters, Guinea Pigs and Other Pets Can Help Autistic Children 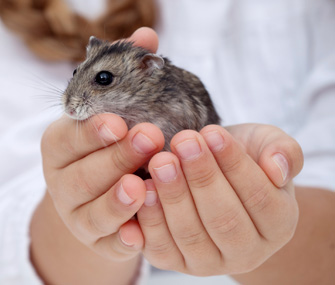 Numerous studies have shown that pets can have a huge impact on human health. People interacting with pets have less stress, lower blood pressure and cholesterol, and increased levels of exercise. The benefits pets can have on people have been demonstrated in numerous social settings including hospitals, nursing homes, prisons and psychiatric facilities. Recent studies have shown that the interaction of pets with children on the autistic spectrum may also help encourage positive social behavior. Autistic children are often drawn to these animals and are calmer, happier and more focused in the presence of these pets.

Studies examining autistic children’s reaction to pets have focused primarily on dogs and horses. Recently, however, other pets have been included in this research. For example, in a study at the University of Queensland in Australia, 99 children from the ages of 5 to 13, some of whom were autistic and others who were not, were observed interacting with either toys or two classroom pet guinea pigs. When the autistic children interacted with guinea pigs, they engaged in 55% more social behaviors than when they interacted with toys. With the guinea pigs present, autistic children were less likely to cry and more likely to smile, talk and accept the approach of other kids.

The study concluded that inclusion of a pet in an autistic child’s activities may increase socialization with both other children and adults. Importantly, these guinea pigs were not trained therapy animals but simply classroom pets that were used to being around children.

The effect pets may have on an autistic child may depend on the age at which the child interacts with the animal. A study conducted at the Autism Resource Center at Hospital Bohars in France looked at autistic children, ages 5 to 16 years, attending a day-care facility. The study compared 12 autistic children who got a pet after the child turned 5 with 12 non-pet-owning autistic children (matched with pet-owning children for age, gender and language skills). Significantly, autism experts consider ages 4 to 5 years to be the time at which the severity of autism most significantly affects development. In this study, pet-owning children were better able to share toys and food with both parents and other kids and better able to comfort others than the pet-less children were.

Interestingly, these findings held true regardless of the type of pet: dog, cat, hamster, or rabbit. Similar findings have been noted in studies of children interacting with turtles. French researchers theorized that when people interact with pets, both person and pet react to each other’s nonverbal cues by adjusting their own behaviors. In addition, pets may distract autistic children from stress-producing stimuli, thereby reducing their anxiety.