Home ›
Our Pet Experts ›
How to Socialize a Kitten

How to Socialize a Kitten 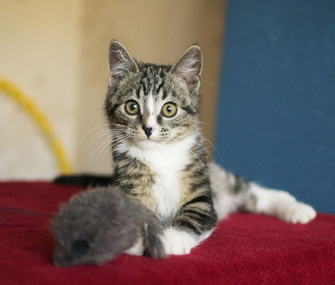 Thinkstock
Use toys rather than hands to play with your kitten and he'll be less likely to bite and scratch your hands as he grows older.

What makes some cats friendly, calm and cooperative while others are more likely to run and hide — or hiss and swat — when confronted with new people or situations? While these differences are influenced in part by genes, they're also influenced by experiences, and especially by early experiences. The process of exposing a kitten to the things he'll encounter later in life is called socialization, and while socialization is accepted as an essential part of raising a puppy, it's too often ignored when it comes to raising a kitten.But you want your cat to live as part of your family, which is why socialization is so important.

The Benefits of Socialization

A well socialized cat is easier to groom, travel with, take to the veterinarian and show off to visitors. Socialization is fun. It involves exposing your cat to new people and experiences while he's still a young kitten. It also involves introducing him to the concept of training.Once cats learn to do one thing on command, it makes it easier for them to learn other things. And the best time to teach your cat the first command is when he's very young.

How to Socialize Your Cat

Feral kittens may require special socialization. Initially, don't let a feral kitten loose in the house, where he can run and hide. Instead, keep him confined in a cage or other small space where he can be monitored more easily. The cage should be near a part of the house where the kitten can see and hear people. When you're not home, turn on a television so he can hear human voices.

Offer him food several times a day so he associates you with good things. Gently stroke him, approaching him from an angle (not directly from the front) and rubbing his head, ears and chin. Most feral kittens will be afraid of being picked up and may scratch in an attempt to escape. If you wrap him in a towel you won't get scratched as easily and you're less likely to drop him if he does try to scratch you. Don't push the issue; hold him for only a short period at first, gradually increasing the time over the next few days. Holding him on your lap when he is sleeping is sometimes helpful.

When it comes to socialization, it’s quality, not quantity, that counts. Good intentions can too often lead to bad results if you overwhelm your kitten. You need to introduce new experiences gradually, never pushing your kitten past the point that he’s scared. Fear is easy to learn but hard to unlearn. Don't stop socializing just because your cat is no longer a kitten. He never stops learning — although it's true that he'll likely never again learn at the rate he's learning now.