How to Spot and Treat Feline Hyperthyroidism 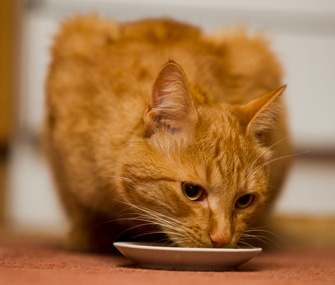 Thinkstock
If your cat is losing weight even though he's eating adequate amounts of food, then he could have hyperthyroidism.

Why should you be aware of feline hyperthyroidism? Because it is the most common glandular disorder in cats. Since it shares several signs with other common feline diseases like diabetes, kidney failure and even intestinal disease, it can be difficult to diagnose. A thorough evaluation by your veterinarian is necessary to make the correct diagnosis.

Hyperthyroidism in cats is a disorder caused by excess production of thyroid hormone from either a benign growth or a tumor of the thyroid gland. Although almost all thyroid tumors in cats are benign and rarely spread, the disease they cause can be life threatening.

That’s because thyroid hormones are intricately involved in the body’s metabolism. The high levels of thyroid hormones present in feline hyperthyroidism result in an “overactive” metabolism and exert negative effects on many body systems. Over time, these negative effects result in the most common signs of feline hyperthyroidism.

1.Weight loss. Weight loss is the most common sign in hyperthyroid cats and is seen in up to 98 percent of affected cats, even though they usually are eating adequate amounts of food. It is common for hyperthyroid cats to be underweight and exhibit an unkempt appearance.

2. Increased appetite. At least 80 percent of owners of hyperthyroid cats report a hearty or very robust appetite. Affected cats often demand food and eat voraciously when presented with their meals; however, they continue to lose weight. This alludes to the seriousness of the overactive metabolism present in affected cats.

3.Increased urination and water drinking. High levels of thyroid hormones cause the kidneys to produce more urine. Owners of hyperthyroid cats will often notice more and larger clumps of urine in the litterbox. Some cats might also urinate outside the litterbox. Affected cats also drink more to compensate for the extra urine production but sometimes still develop dehydration.

5.Hyperactivity and/or behavioral changes. Owners of hyperthyroid cats often report increased activity and restlessness, as well as excess vocalization. Some affected cats may develop a tendency toward aggression and exhibit unpredictable or unusual behavior.

These are the most common signs of typical feline hyperthyroidism. However, due to routine screening of middle-age to older cats for this incredibly common hormonal disorder, many veterinarians are diagnosing hyperthyroidism earlier than ever before. As such, some affected cats may have only minor signs with limited abnormalities on their examinations. A small percentage of hyperthyroid cats may not exhibit any obvious disease signs at all.