How Vets Determine a Puppy or Kitten's Age 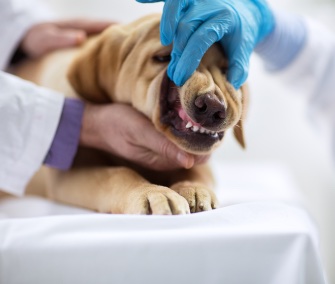 iStockphoto
How old is this pup? A vet might be able to tell by examining her teeth.

When a firefighter rescues a kitten from a storm drain or a Good Samaritan finds a stray puppy on the street, the animals are often seen by a veterinarian, who makes sure they’re OK — and estimates their age. But how do the vets figure that out?

It turns out that veterinarians have a trick up their sleeves: examining the baby animal’s teeth.

We talked with Dr. Margret Casal, who specializes in pediatrics at the University of Pennsylvania School of Veterinary Medicine, to find out how they do it.

She explains that puppies and kittens have a pretty set timetable for when their deciduous teeth (or baby teeth) come in and for when their adult teeth replace them.

Before we get to the timing, here's a review of what's what when it comes to teeth.

So if a vet looks in the puppy's mouth sometime before 8 weeks of age, she's likely to be able to get a pretty good idea of how old the puppy is when she sees which teeth have erupted so far, says Casal.

“Where it gets a little tricky sometimes in dogs is between 8 and 16 weeks. Once you’ve got all your deciduous teeth, nothing really happens overtly for those two months from 8 weeks to 16 weeks,” Casal says. “But you can generally look at the overall state of the puppy and say, ‘Is it close to teething or has it just developed its deciduous teeth?’ There’s a gray area somewhere in between.”

Once puppies reach 16 to 18 weeks of age they’re starting to get their first set of grown-up teeth: all of their 12 incisors, one set of four premolars and one set of four molars. Then from 20 to 24 weeks, they’ll get their four adult canines, three more sets of premolars and one more set of molars. Finally, at 24 to 28 weeks, their final set of two permanent molars erupts, only on the bottom.

Overall, looking at a young dog’s teeth is a great way to tell his age — at least “in the absence of disease,” Casal says. “There are diseases that will either delay tooth eruption or prevent tooth eruption, so those things make it a little bit harder,” she explains. “But in general, if the puppy’s pretty much healthy, you can pretty much tell its age.”

There are some breeds, however, that are more of a challenge. Casal finds that in “really tiny breeds,” like Chihuahuas, “the teeth seem to erupt not as nicely as they do in other breeds of dogs, so it’s harder to see sometimes.” She added that in some dogs with underbites or overbites it can be harder for a vet to tell which teeth have emerged.

Now, what about kitten teeth? They follow a similar schedule to dogs, with their first teeth starting to erupt at 2 to 3 weeks, and more coming in each week until they’re about 8 weeks old. Then, they also have that gray area between when they have all of their baby teeth and when the first adult teeth start to emerge.

But kittens and their teeth are so tiny that determining their age with their teeth can be more challenging.

For example, “It’s sometimes very difficult for people to tell the adult [canines apart] from the baby canines, but there are a couple of tricks,” such as a groove in the canine that appears only in the adult tooth, Casal says.

Luckily, with kittens there are other methods to estimate their age — and some include their weight, she says.

Veterinarians can use the weight combined with what they know about the cat’s tooth development to figure out an accurate age. “When you have a 16-week-old kitten, it’s going to be maybe 4 pounds at most, and then those adult incisors are going to be really, really tiny,” Casal says. “That’s where people tend to not see the difference, or it’s harder to see the difference. You just have to look really carefully and compare.”

As cats and dogs get beyond 6 or 7 months old, using their teeth to figure out their age is harder.

Although veterinarians may take the state of a dog or cat’s teeth — such as gingivitis, decay, wear and discoloration — into account when trying to determine how old they are, they would need to consider a lot of other factors as well, including genetics. “Some breeds have more tooth problems and the teeth might look more worn earlier in life than in other types of dogs,” Casal says.

The next time you see a puppy or kitten with an estimated age, we bet you'll have a whole new appreciation for how that age was determined!