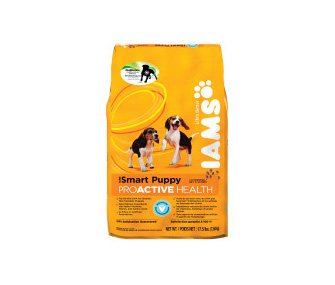 Iams ProActive Health Smart Puppy, distributed to 16 eastern and southern states, has been recalled after testing positive for high levels of a toxin produced by fungus growing on the food that can cause liver problems, the U.S. Food and Drug Administration said.

Procter & Gamble, which manufactures Iams, said the recall involves a single production lot of Iams ProActive Health Smart Puppy dry dog food with unacceptably high levels of aflatoxin. The food has “Use By” or expiration dates of Feb. 5 or Feb. 6, 2013, and is sold in 7-pound, 8-pound and 17.5-pound bags.

Pet owners who bought the food are asked to call Procter & Gamble weekdays between 9 a.m. and 6 p.m. EST at 866-908-1569 if they want to replace the product, get a refund or have questions.

Symptoms of illness due to excessive consumption of the toxin, the FDA said, include sluggishness or lethargy combined with a reluctance to eat, vomiting, yellowish tint to the eyes or gums, or diarrhea. If your pet has eaten this food and has any of these symptoms, you are urged to contact a veterinarian.