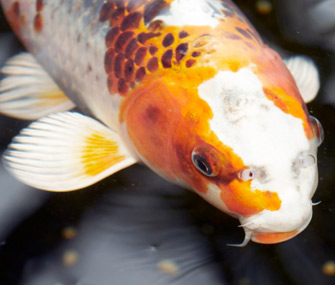 When Mike McMahon put a few fish in his backyard pond in Orlando, Florida, back in 1978, he wasn't envisioning where he's ended up today.

"I happened to be in a shop that had little koi, an inch and a half or 2 inches long, and I put three out in the pond," he says. "They were a lot more interesting and prettier than goldfish."

He quickly found they were "a lot more" in other ways as well: They grew and grew, tore up the waterlilies and ate all the other plants, and he kept digging more ponds for them—until now. Long story short, he's got a pond the size of aswimming pool and a collection of more than two dozen awards and countless ribbons from koi shows.


It's All in the Details

Koi — the big, colorful fish you've seen in outdoor ponds, especially in Japanese-style gardens — may all look equally pretty to you, but to serious fanciers, the details matter."It is very much like dog shows," McMahon says. "The koi are judged at a show on the basis of how near they come to a standard for koi and for the particular variety."

Varieties differ in pattern and color, but if a fish is supposed to be black and white, that's just the start.

"As you get into it, you find that all blacks are not the same," he says. "There's black with a bluish tinge, there's black that's really a deep, dark gray slate. Is that black a matte finish or gloss?"

Koi are a type of carp that are gray in the wild but subject to color mutations that can be refined by selective breeding. The familiar goldfish was developed in China from one species of carp; in Japan, people bred another species for color and pattern in the early 19th century. The process of refining their beauty continues to this day.

"If you go back to the 1960s, when you start seeing photographs of koi shows, and look at those fish that at the time were the best in the world, anybody today who can afford a pond can afford to have fish of that quality, and nobody would be particularly impressed," McMahon says.

So what makes one fish better than another? To start, koi are judged on how they look from above, the way you'd view them in a pond. "Koi looked at from the side don't look very good; they're not intended to be viewed from the side," he says. "The patterning is generally focused on the back of the koi and creates its own canvas there."

The shape of the body that provides that canvas is an important factor. "They have been bred for body conformation — a long, full-bodied look," he says. "And if you look at the silhouette, the outline flows smoothly with no bumps — a very gradual, smooth body line." 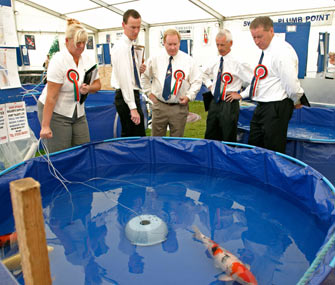 Dave Bevan / Alamy
Judges stand over a vat at a koi show.

Then, there's refinement of the colors and patterns: purer whites, cleaner outlines, deeper pigments. Breeders have developed a pearly luster in some varieties, such as the Kohaku, a red and white koi that's the most highly refined.

"Older koi had no shine to them," McMahon says. "Now in a Kohaku, the white has a pearlescent effect — a sheen that makes it even whiter. The red has a luster to it, almost like looking at silk. One of the explanations often given is the comparison of cotton to silk: Red pigment on silk has a sheen and depth and brilliance to it. The same pigment on cotton is flat."