Home ›
Our Pet Experts ›
Dr. Tina Wismer ›
Lotions, Creams and Prescription Medications: Should My Pet Be Licking Me?

Lotions, Creams and Prescription Medications: Should My Pet Be Licking Me? 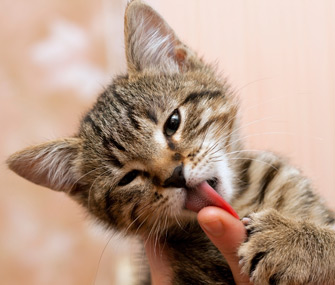 Why does my dog lick me after I apply lotion? It's acommon question veterinarians are asked.

Many dogs and cats appear to like the taste of lotions (especially if the lotions are infused with enticing scents) as well as other topical products, such as over-the-counter (OTC) and prescription medications. Let’s take a look at some of the potential concerns for each group.

These products are often viewed as innocuous because they can be purchased without a prescription at your local supermarket or pharmacy. Many products approved for use in people, however, are not meant for use in pets. Though most topical, over-the-counter lotions and creams are not likely to cause serious problems for your pet, there are a few types that can be problematic. In most cases a lick or two is not likely to cause an issue, but the behavior should be discouraged.

Keep in mind that veterinarians frequently also recommend some of the more innocuous products in this group — steroid creams, triple-antibiotic ointments and salves — to treat pets. When used under the direction of your veterinarian, these products are safe, but carefully follow your vet’s instructions regarding application and discourage licking behavior.

Some examples and their unintended consequences: