Moving? Help a Country Dog Adjust to the City 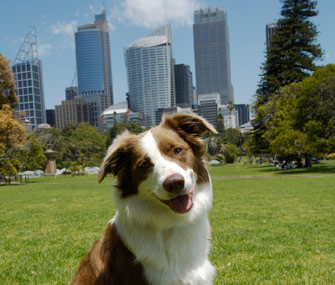 Thinkstock
Your dog can still enjoy the great outdoors in the city if you take him to parks and walk him on trails.

Moving to a new home can sometimes also mean moving to a different environment — for instance, it's a big change to go from a rural area where your nearest neighbors are acres away to a suburb or city where it's noisy and there are more cars and people.

That may be exciting for you, but your dog might need some help getting used to his new neighborhood, and his routine may also need to change.

For instance, if you and your pup move from a house where you have a sizable backyard to a pet-friendly apartment in a city, he might need to learn to go potty on the sidewalk if there isn’t a park or dog park nearby. You may also need to take him on multiple walks a day, and you’ll need to take precautions to keep him safe from urban dangers, like hot pavement. If he’s wary of traffic and people, you might need to use positive reinforcement to help him become more comfortable with his surroundings. A particularly fearful dog might need help from your veterinarian, who may recommend a veterinary behaviorist.

New environments may also pose different health risks, so it's important to check in with a veterinarian in your new location to make sure your dog has the right vaccinations and parasite control. If your dog used to spend hours running around the countryside and will now be in an apartment, you'll probably need to walk him more often and cut back on his food.

Even a move to a suburb that’s busy but not quite as densely populated can require adjustments for a dog who’s used to quiet and plenty of space to run and play. Scooby, a Golden Retriever, moved in 2013 with his family from upstate New York, where his owners had 11 acres of land and their home was set away from the main road, to an active street in a village in North Country, N.Y. It took him some time to get used to his new surroundings.

“Our first night was horrendous; Scooby didn’t know what to think of his new environment so he hid under the back porch until 3 a.m. I slept out there with him because I was terrified he was going to [try to] go back to his old home, which was four and a half hours away,” says Stephanie Gwozdz, his owner.

Gwozdz says she had to teach Scooby the boundaries of his new yard, which doesn’t have a fence, taking him around the yard and telling him “no” and “yes” in regards to where he could go so he wouldn’t attempt to wander into neighbors’ yards. With consistency in training and positive reinforcement, Scooby learned fairly quickly where he was allowed to be. (Of course, not all dogs will respect the property lines — especially if there's a squirrel in the next yard — so a fence may still be needed.)

Scooby also became more protective of Gwozdz’s family in their new neighborhood and was wary of neighbors, the mail carrier and UPS driver. Gwozdz says she’s taken Scooby to meet his neighbors on either side of the house, and the UPS driver has also taken the time to let Scooby get familiar with him.

It took Scooby about six to nine months to get comfortable in his new home and Gwozdz says she believes his success was based on consistency, positive reinforcement and rewards.

“In my heart I know he loves the country environment better, but with some slight accommodations, we’ve tried to make him as happy as possible in our environment,” she says.

Winnie, a 6-year-old brindled mixed breed, just moved from a home with 10 acres of land in Wildwood, Fla. to Damascus, Md., where she and her family are staying while looking for a home in their final destination, Winston-Salem, N.C. Winnie's getting used to her home and routine in Damascus, says Olivia Everett, her owner, but Winnie will have to adjust once again when her family makes their next move. 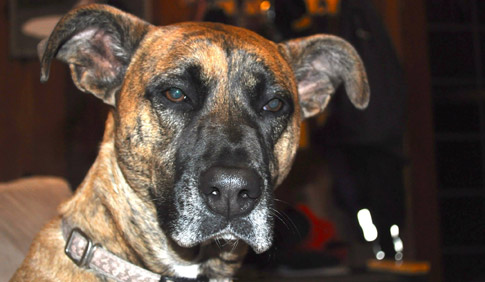 Olivia Everett
Winnie just moved from a home with 10 acres of land to one that's much closer to neighbors. She's getting used to more noise and people.

Their home in Damascus is close to neighbors. While it has a back yard, it’s a far cry from the size Winnie was used to, and Winnie doesn’t like to go out in the yard by herself.

“At home [in Wildwood], she’d lay out in the yard sunning herself. Here she sits right on the back step unless I go out with her,” Everett says.

Everett is taking Winnie on more walks since she doesn’t have as much space to run, but fortunately, she has access to lots of paths and parks. Winnie barks some at other dogs on walks but usually settles down once Everett asks her to be quiet and provides praise. Winnie has also been pulling at her leash and Everett is going to give her a refresher on heeling.

While Everett says she’ll continue to regularly walk Winnie in Winston-Salem, which is the fifth largest city in North Carolina, she’s hoping to ultimately find a home with some land where Winnie also has some room to run and play.

“In my opinion and our personal preferences, children and dogs… need some space to explore and be comfortable,” she says.