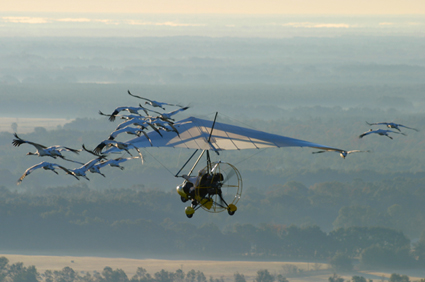 In 1941, a single dwindling flock of 15 whooping cranes remained in the entire world. But thanks to a novel conservation organization, Operation Migration, there are well over 500 of the still-endangered birds gliding through the skies.

It just took a little work to teach them how.

The organization's lead pilot and CEO, Joseph “Joe” Duff, and select members of his 11-person staff dress up in "baggy-suited" outfits meant to disguise their human features, and raise the birds in captivity until they’re ready to fly south.

And here's where it gets really interesting: The birds literally follow Duff, who leads the flock via a special plane, along new migratory paths. The ultimate goal: Build several flocks to seal a future for the species.

We caught up with Duff to discuss what it's like to commandeer a flock of birds while flying a whooping crane mother plane.

Q: Why did you get involved with helping endangered whooping cranes in the first place?

A: Joseph Duff: "Operation Migration is a nonprofit that I cofounded back in 1994 with Bill Lishman, who was the very first person to fly with the birds. Initially, it was something creative and inspiring to do. Then the scientific community caught wind and thought it could be a way to help endangered species, so we tried the process first with Canada geese and then sandhill cranes, a nonendangered species, before working with the endangered whooping crane."

Q: How exactly do you raise the birds and dictate their migratory patterns?

A: "It’s a simple process based on imprinting. Whooping cranes are precocial birds, which means that they hatch in a nest on the ground and can walk right away and open their eyes. They have a natural instinct to imprint on the first thing that nurtures them, and we make sure that’s us. The costume we wear is designed to disguise the human form, and we carry a puppet that looks like an adult whooping crane, so when they’re released and encounter humans in normal dress, they’re afraid of them. That way, they remain wild birds, which is critical." 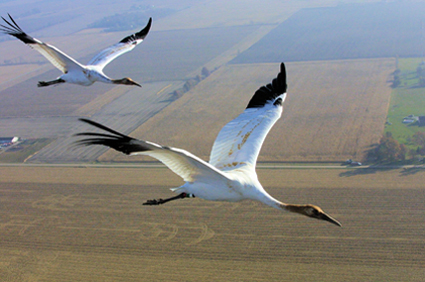 Q: How does the migration work? Are they afraid of the planes?

A: "The process starts at a research center in Maryland, which houses the largest captive whooping crane population. To get them used to the plane, we play a recording of adult whooping cranes mixed with the sound of an airplane engine. Then we put the chicks inside of a pen and release mealworms through a long puppet that looks like an adult whooping crane.

When they’re about 50 days old, before they learn to fly, we put them in individual containers and transport them to a wildlife center in Wisconsin, where they learn to fly. We generally start the migration from there and travel 1,285 miles together across seven states."

A: "Every bird has a different personality, like a child, so they might be subservient, aggressive or independent. When you refrain from talking and wear a puppet in the pen, you can interact with the birds, who allow you into their social structure. They actually have a complex communication system. We now know the meaning of about 50 different postures and movements."

Q: Does that require special training?

A: "Yes, there’s a very strict protocol. You need to know how to be dominant, how to react to a bird who’s being aggressive with you — and it takes about a year to figure out how to fly with them. Of the 11 people involved in the project, very few actually interact with the birds. Most birds in the wild don’t like to be touched because their whole dominance structure is based on poking, so they’re not affectionate. Some of them will call to you and beg for food, and other times you’ll have a little standoff. It’s a lot like being in high school."

Q: Have your efforts been successful so far?

A: "We certainly have a ways to go, but the population has grown. Reintroduction is a slow and difficult process, more difficult than conservation. Our idea is to establish a self-sustaining flock, so you need about 125 individuals flying back on the migration. You also need 125 breeding pairs, but whooping cranes don’t successfully reproduce until they’re about five years old. So far, three chicks have hatched in the wild."

Q: What's the best part of your job?

A: "Flying with the birds. It is a spectacular thing to be an honored guest at a migration."

You can watch the current migration in action by checking out the organization's Live Crane Cam, and read about the flock's progress through daily In the Field journal entries.