Pet Injury Protection: Alternatives to the Cone of Shame 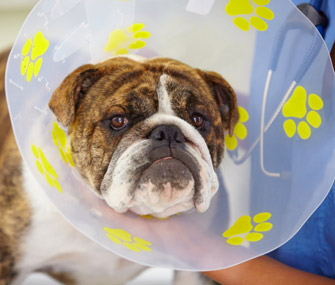 It’s all fun and games until someone ends up in a cone.

So goes the caption to an irresistible LOLcat image I keep on my smartphone. It’s one that serves to underscore the immense pleasure we humans seem to get from subjecting our pets to the “cone of shame.”

Variously known as the “E-collar” (short for “Elizabethan collar”), the “lampshade,” the “satellite dish” and “that ungodly torture device that goes around her neck,” the ubiquitous plastic cone is by far the most common solution to the problem of postoperative incision complications and other areas in need of self-trauma avoidance.

That’s because most pets have a thing about licking at their incision sites, pawing at their itchy ears, rubbing their irritated eyes and generally scratching and chewing at body parts they shouldn’t. But what’s worse than having to force your pet to wear the cone?

Having to deal with the ravages inherent to self-trauma situations in pets. After all, restitching incision sites isn’t fun for anyone. And blowing beaucoup bucks on antibiotics after she has overdone it on what was once a simple scratch is no fun either. Given these alternatives, keeping one of these devices on your pet would seem to be the lesser of two evils.

But let’s say you have a pet who performs one of the following tricks when he’s sporting an E-collar: