July 1, 2014: We've scoured the Web to find the best and most compelling animal stories, videos and photos. And it's all right here. 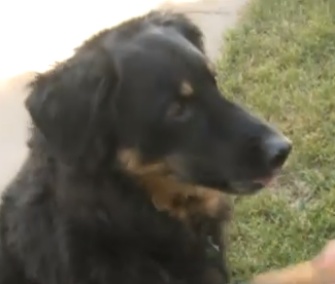 Tucker, a 10-year-old Rottweiler mix, has earned the nickname “food burglar” for devouring what he finds around his Wisconsin home. Earlier this month, owner Lois Matykowski was eating popsicles with her granddaughters and got up to get Tucker some water. When she came back, she discovered that he’d struck again, eating one of the kids’ popsicles — stick and all. She called the veterinarian, who told her to put Vaseline between two slices of bread to help the stick come out. Tucker coughed up the stick shortly afterward, but two days later he got sick again. While Matykowski was cleaning up after Tucker, she found something sparkly: the diamond ring she’d lost six years ago. “I screamed. I kid you not,” Matykowski said. Tucker’s vet said the popsicle stick must have dislodged the ring and gave the dog a full X-ray to make sure he wasn’t hiding anything else in his belly. "Tucker is a big dog on campus now. He is my hero," Matykowski said. — Read it at ABC News

Researchers at Emory University in Atlanta have found that chimpanzees prefer Indian ragas and Akan tunes from West Africa to Japanese music. Previous studies that focused on Western music found that primates liked silence better than music. For the new study, researchers played 40 minutes of music in the outdoor enclosures of 16 adult chimpanzees at the Yerkes National Primate Research Center in Atlanta every morning for 12 days. The chimps spent more time in the areas where they could hear the African and Indian music but headed to quieter parts of their enclosure when Japanese taiko music was played. "Chimpanzees may perceive the strong, predictable rhythmic patterns as threatening, as chimpanzee dominance displays commonly incorporate repeated rhythmic sounds such as stomping, clapping and banging objects," said study co-author Frans de Waal. The findings were published inJournal of Experimental Psychology: Animal Learning and Cognition. — Read it at Discovery News


Experts Warn About Sunburn in White Dogs and Cats

Veterinary dermatologist Christa Horvath-Ungerböck from the University of Veterinary Medicine, Vienna, is warning pet owners that dogs and cats with white or thin coats are at particular risk of sun damage. Dog breeds that are especially vulnerable to sunburn include the Dogo Argentino, white Bulldogs, Dalmatians, Boxers, Whippets and Beagles. Cats who are white or multi-colored with white patches have skin that is very sensitive to light, especially on their heads. Horvath-Ungerböck said sunburn can cause itching or pain for some animals, and repeated sunburns could even cause pre-cancerous conditions or skin tumors. — Read it at the U.K.’s Telegraph 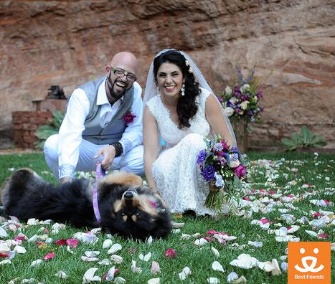 Jackson Galaxy, the star of Animal Planet’s My Cat From Hell, married Minoo Rahbar Sunday at the Best Friends Animal Sanctuary in Utah. But it wasn’t a cat who played the role of ring bearer — it was their very happy dog, Mooshka. Instead of wedding favors, the couple sponsored a Best Friends animal in honor of each guest. Galaxy is a Best Friends Ambassador, and made headlines last month when he attempted to help the Oregon family who barricaded themselves in a bedroom to protect themselves from their cat, Lux. Well wishes for the couple poured in on the Best Friends Facebook page and Twitter. “Congratulations to the PURR-FECT couple, who celebrated their nuptials in the PURR-FECT place!” Tweeted one fan. — Read it at Facebook

Two police officers in Prince George’s County, Maryland, found a dog wandering in a bank parking lot over the weekend, but they didn’t have a leash for her. They searched their trunk and came up with a creative solution: a piece of yellow caution tape. They tied it to Sophie’s collar to keep her safe while they gave her water and got her back to her owner. — See photo at NBC Washington