Jan. 10, 2017: We've scoured the Web to find the best and most compelling animal stories, videos and photos. And it's all right here. 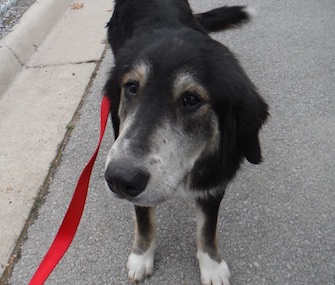 Jonesboro Animal Control / Facebook
Animal control in Arkansas is hoping to find the owner of this loyal senior dog.

When his elderly friend was apparently fatally hit by a car in Jonesboro, Arkansas, last week, a loyal dog refused to leave her side. The Shepherd mix, a senior himself, held vigil by her side and wasn’t willing to leave when animal control officers were called to the scene. “He pretty well refused to leave,” Owens said. “Me and another officer had to pick him up and put him in the back of our truck. Then we had to pick her up and put her in the back of the truck and it seemed to calm him down a little bit when we picked her up, but he was still wanting to try and get over to the next kennel.” Owens believes the poor pup has an owner because he’s friendly and looks well cared for, but so far, no one has come forward. He will be put up for adoption on Friday if no owner is found. — Read it at People Pets

While conducting a population survey on Malolo Island in Fiji, scientists with San Diego Zoo Global were delighted to find an unexpected resident: a baby Fijian crested iguana. The critically endangered iguana was thought to be extinct on the island until 2010, when a few of the reptiles were found in a small patch of forest. The baby makes 31 iguanas known to be living on the island. The scientists decided to take the baby in and care for him in captivity until he’s a little bigger and more able to protect himself from predators. He’ll be released back into the wild when they’re more confident he will survive. — Read it at Seeker

A litter of six frisky cubs means mom has her paws full at Burgers’ Zoo in the Netherlands. The cubs were born on Sept. 14 and recently explored the outdoors for the first time, with mom keeping a close eye on them. But amazingly, this mom has done this before. This is her second litter of six cubs. Only about 5 percent of cheetah litters are that large — most have three or four cubs at a time. The beautiful spotted babies are still nursing but have started to eat meat, too. — See photos at Zooborns 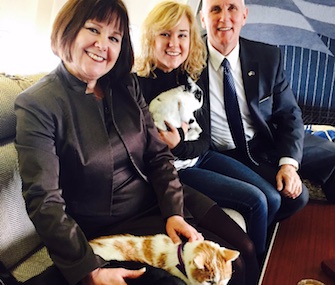 Twitter / Mike Pence
The Pence family brought their two cats and bunny on their flight from Indiana to Washington.

Pences and Pets Move to D.C.

Donald Trump may be the first president in decades not to have a dog in the White House, but his vice president, Mike Pence, might be making up for that. The VP-to-be and his family officially made their move from Indiana on Monday, and Tweeted a photo of himself on board an Air Force plane with his wife, Karen, and daughter Charlotte along with their two cats, Oreo and Pickle, and their bunny, Marlon Bundo. The Pence family’s 13-year-old Beagle, Maverick, sadly passed away about two weeks before the election. — Read it at Twitter via Mike Pence

Dog Abandoned With Trash Gets Adopted

After a difficult end to 2016, a Pit Bull and Labrador Retriever mix who was sadly left out with the trash when his owners were evicted from their Detroit home in December now has the loving home he deserves. Ollie-Loo was found sitting on a chair waiting for his former family to come back for him in frigid temperatures. The friendly dog didn’t hesitate to jump into a nice warm car when Detroit Animal Welfare Group volunteer Terri Looby went to pick him up. Ollie was underweight and suffering from a broken leg that required surgery. His luck soon changed, when he met Art, his foster dad, who saw Ollie’s story on the news and felt a connection to the dog. “He loves Ollie and Ollie loves him just as much. They found each other,” Looby said. On Saturday, it became official when Ollie’s adoption was finalized. — Watch it from Inside Edition via Yahoo