Proper Pet Waste Disposal: How to Protect People and the Environment 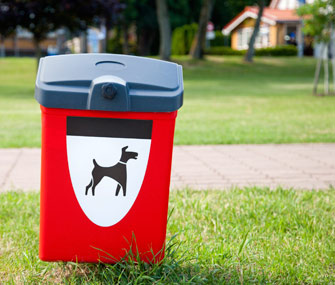 How often have you almost stepped in — or actually stepped in — dog poop that was left on the ground? Pet waste that isn't properly disposed of isn't just a hazard waiting to happen to your favorite pair of shoes, and it doesn’t just disappear (unless you have a friendly neighborhood pet waste disposal person).

The Environmental Protection Agency (EPA) considers pet waste a "nonpoint source pollutant." This type of pollution is caused by runoff from rainfall or snowmelt moving over the ground, picking upthe pollutantand depositing it into natural bodies of water and underground drinking water.Herbicides and insecticides are found in the same category.

When pet waste is left on the ground, it can havea devastating impact on lawns and, more important, on the larger environment as well.It also poses a threat topeople andother animals.

Two of the greatest dangers of unattended pet waste are the parasites and bacteria found inside it.

“Roundworm eggs last for years, and[because of this],dog waste should not go in compost that will end up as vegetable garden fertilizers. Hookworms are a concern in sandy areas where people are on the beach or barefoot in parks and playgrounds since these worms will migrate under the skin, causing scars,” says Steve B. Thompson, DVM, DABVP, clinical associate professor at Purdue University’s College of Veterinary Medicine and director of the Pet Wellness Clinic at Purdue. “These two worms are the primary reason for ‘pooper scooper’ laws at beaches and public parks.”

Other bacteria and parasites that can survive in dog and cat waste include tapeworms, Salmonella, Giardia andEscherichia coli (E. coli). Cat feces can also contain Toxoplasma gondii, which can lead to the disease toxoplasmosis.

If waste is not picked up, people and pets are at risk for being infected or reinfected with these parasites. Pets who walk through your house after being in an area with unattended waste can also increase your exposure to these dangers because they may track that waste into your home. For the same reason, children who play outside in areas frequented by dogs or cats should always wash their hands afterward, just in case they came in contact with pet feces.

Although waste that gets into the water can spread these parasites and bacteria, waste's high concentrations of nutrients such as nitrogen and phosphorus can also harm aquatic ecosystems. It can contribute to the nutrient pollution that causes algal blooms, which kill aquatic life and plants and can make people and pets sick.

According to the EPA, “2 to 3 days of droppings from a population of 100 dogs contribute enough bacteria, nitrogen and phosphorus to temporarily close a bay to swimming and shellfishing.”

While some people think pet waste acts as a good fertilizer because of these nutrients, leaving waste on your lawn can have the opposite effect, causing "lawn burn" and killing grass.