Home ›
Our Pet Experts ›
Puppy Teething 101: What to Watch Out For

Puppy Teething 101: What to Watch Out For 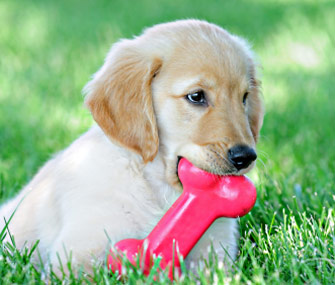 Puppies have 28 baby teeth: six incisors, two canines and six premolars on both the top and bottom.

Here are a few facts about puppy teeth:

How to Alleviate Your Puppy's Gum Pain

As the teeth are coming in, your puppy's gums may hurt. You can help by giving him chew toys in a variety of textures. A toy that can be soaked in or filled with water and frozen will provide your puppy with a cold teething object, which can be particularly soothing.

Make sure whatever you give him does not resemble anything of yours that you don’t want him to chew — this means no old shoes! Don't give him anything that resembles something he can find around the house, either: no socks and no stuffed animals (if you have children who collect them). What your puppy learns to chew on at an early age will tend to be what he looks to chew on for the rest of his life.

But in other puppies, the upper jaw may jut out well beyond the lower jaw, and the upper canine tooth may be placed in front of the lower canine tooth. This is an abnormal bite that probably will not get better. As these puppies mature, you must make sure that the short lower jaw, which narrows toward the end, is not so short and narrow that the lower canines jab into the upper gums or roof of the mouth (a condition called base-narrow canines). Resolution of this issue depends on the extent of the problem. Some options include tooth removal, orthodontic movement of the teeth and crown reduction.