Search and Rescue Dogs: The Fascinating Ways These Heroes Are Trained 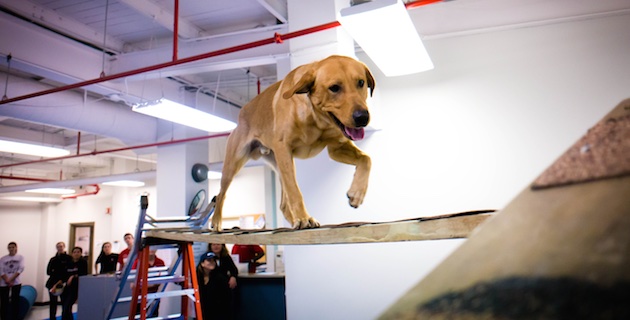 Penn Vet Working Dog Center
Perhaps you've seen footage of incredible search and rescue dogs sniffing out survivors after disasters. We take a look at how these hero canines learn to do this important, lifesaving work.

They climb ladders, run through tunnels and play hide-and-seek in the snow. They also go for a dip in the pool and get a pilates workout.

Puppies learning to become search and rescue dogs will someday have very serious jobs. But when it comes to their training at the Penn Vet Working Dog Center (WDC) in Philadelphia, it’s (almost) all fun and games. 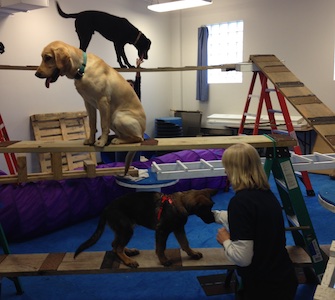 The dogs at the WDC are training to do a wide variety of detection jobs. Some will work in law enforcement, sniffing out explosives, fire accelerants and drugs; while others will participate in disaster recovery or have a medical focus, like detecting ovarian cancer or working as diabetic alert dogs. They learn through positive reinforcement and play — and fitness and obedience are keys to their success, too, says Dr. Cynthia Otto, a veterinarian who started the WDC and is the lead investigator in a long-term study on the health and behavior of detection dogs.

Dr. Otto was inspired to start the center after taking care of the dogs who searched for survivors and later for remains at Ground Zero after the attacks of Sept. 11, 2001. As a tribute, the puppies are named for these canine heroes, as well as human rescuers and victims of 9/11.

Vetstreet talked with Dr. Otto to find out about the amazing ways the center trains puppies to do this vital search and rescue work.

Many of the dogs who’ve been trained at the WDC since it opened in 2012 were donated by breeders, and start classes when the puppies turn 8 weeks old — much earlier than most other working dog programs, which start at about a year old, Dr. Otto says. Recently, the center started breeding puppies, too.

By raising its own litters, the researchers there are able to study the impact of the dogs’ genetics — and follow their progress more closely from the outset.

When the puppies in its own litter were only three weeks old, the WDC team started introducing them to distinct scents in jars, including narcotics, arson and pepper. The researchers recorded the pups’ reactions to the smells. Dr. Otto said the idea of introducing the puppies to the scents wasn’t to figure out what they were interested in, but rather to stimulate the little guys’ neural pathways.

“The ones that we have that are our own litters, we do all sorts of environmental work with them from day one, basically, and we encourage the breeders to do the same sorts of things,” Dr. Otto says.

When the WDC trainees first start classes at 8 weeks old, they’re working on getting their “liberal arts degree,” explains Dr. Otto. “They get all of the foundational stuff for whatever it is that they might then show the most aptitude for. All of the dogs learn the basics of search, they all learn fitness, they all learn obedience, they all get exposed to different environmental stimuli. They all get the sort of basic curriculum.”

The adorable students live with volunteer foster families who drop them off for class each day at 9 a.m. and pick them up at 5 p.m.

As they grow up, they begin to show their trainers their natural strengths and abilities. Their curriculum is then tailored to fit that interest, Dr. Otto says. The puppies who go on to get their “master’s degree” in search and rescue often stand out in the crowd.