The Amazing Ways Dogs Are Helping Kids With Physical Therapy

In Idaho, Diane Rampelberg of Dustin's Paw is doing similar work with her yellow Labrador Retriever, Prairie, at St. Alphonsus Rehabilitation Services’ Jumpstart (STARs) program. The program is for kids who come to therapy multiple times a week. 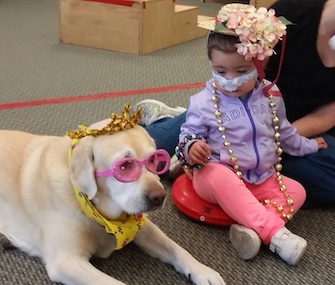 Dustin's Paw
Having a tea party with Prairie during a therapy session helped this child quickly adjust to a CPAP, which helps her sleep better.

Prairie is a facility dog trained by Canine Companions for Independence in California. Now nearly 8 years old, he’s the third dog Rampelberg has had who was trained by CCI. Facility dogs are placed with professionals, like nurses or teachers, who work with the dog at least 20 hours a week.

Rampelberg has a background in teaching and working with special needs children. Thanks to grants, she now volunteers 40 hours a week with Prairie at STARs, helping kids who are on the autism spectrum, have Down Syndrome, are working on strictly physical disabilities or have other diagnoses. (Prairie sleeps through some of those hours, while Diane does other work at the clinic.)

Prairie spends some of his time doing traditional therapy dog work, like calming a child who is having a meltdown or convincing a reluctant child to come inside to start a therapy session. But like Atlas, Prairie also helps children walk, communicate and strengthen their muscles. He also assists with motivation and distraction.

For example, a physical therapist may tell Rampelberg she needs help getting a child to achieve a half-kneel position, which is an important step in being able to stand up or sit down. It may involve staying in the position for a certain amount of time, which can be a challenge for the patient.

“It’s my job…to come up with the activity that’s going to motivate the child to stay in that position for the amount of time that the therapist needs,” Rampelberg explains. “It could be anything from having the child pushing the ball off the bench all the way to having the dog’s nails painted.” Depending on the child, Prairie's nails may be painted with water — or he could be sporting pink nails for few days.

Prairie then helps the child progress to standing and walking.

“We have harnesses that we put on to provide support. Eventually, we drop it to a leash, and I have several different kinds of leashes,” Rampelberg says. “They can walk the dog and they are so proud, and then we have songs I sing, you know, ‘There’s Jimmy and his dog, oh Jimmy and his dog, his loves him and he loves Jimmy, now isn’t that a wonderful thing, woof woof!’, and we walk down the hall.”

Prairie also knows how to play games with the children using an iPad. He has a special switch that allows him to play along. Another creative thing several therapists do is play dress up or have a picnic with the dogs.

“Even teaching our kids how to button and zip — dressing up a dog is so much better than just having a button board in front of you,” says Suzan Syron-Singh, owner of the Children's Therapy Center in Virginia.

Many of the kids at both the Idaho and Virginia clinics are improving their interpersonal communication, and the dogs have been a big help. They give the canines commands and see the dogs do what they ask, for example.

“I’ve seen a lot of improvement in social interaction with kids, especially with kids on the autism spectrum,” says Amanda Stoltz, an occupational therapist at the Virginia center. “The dogs are very calm, they’re way less stimulating than people, so for kids who aren’t doing a lot of eye contact with adults and are certainly not ready for peers who can be very overstimulating, the dogs provide a really nice bridge between those worlds, so they give them a way to interact.”

The therapists and handlers, as well as the patients’ parents, have seen real progress, thanks to the dogs.

“Some of the children that are nonverbal, we’ve actually been able to see them start to form words in order to communicate with the dogs,” Benner says. “It really does seem to transfer pretty easily from a dog to another child, like they get it.”

The dogs have also motivated some of the kids to learn sign language as a way of communicating with their four-legged friends, and the therapists have taught the children to watch the dogs’ body language as a way to pick up on social cues from people.

For example, Jen Ingersoll says her daughter didn’t pay any attention to her own pets until she started working with Hobbes. Now Catherine asks if she can give her own dog a treat. “It’s fun to see that carry over. Any social bond she can make is good for her development, and to see her now make those with the animals is so great,” Ingersoll says.

The dogs also seem to have a way of changing the whole atmosphere at the clinics where they work.

“It’s hard to explain the effect that a dog has on a place,” Rampelberg says. “A lot of people say that our clinic is kind of like a family, kind of like a home.”