The Creation of the Stud Stopper 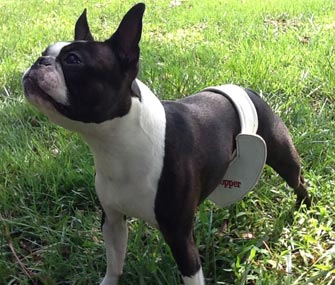 When David and Tina Moody fell in love and got married, they created a kind of lopsided “canine Brady Bunch.” His male Yorkies made friends with her female of the same breed and a new family unit was created. Everything was working out wonderfully — until, that is, the girl pup went into heat. “When females are in heat, all they want is to be together, and they cry and cry and cry,” Tina explains. “One day, David thought of a way their dogs could still be together and simulate mating, but not actually ‘connect.’” And thus was born the Stud Stopper, a nonsurgical, ultra-humane form of doggy birth control.

When the idea took root in 2005, David and Tina had six Yorkies living at their three-house property on a Hampton, Va., cul-de-sac — also home throughout the years to four biological children and three kids seeking a haven, as well as 10 chickens, a turtle and a stray cat. “We had a posse,” Tina says proudly. The Moodys certainly weren’t lacking ways to keep busy. Yet that very night, David — a master upholsterer, motorcycle rider and four-time winner of the Mr. Virginia title — headed to his on-site studio and got to work. “Our dogs are our life, so we wanted to enrich their experience by not casting them out when they were in heat,” Tina says. “David created a dinosaur prototype of what the Stud Stopper became, [but even] that worked really well. We couldn’t believe it. It was something so simple... like a pet rock. It’s not complicated!” 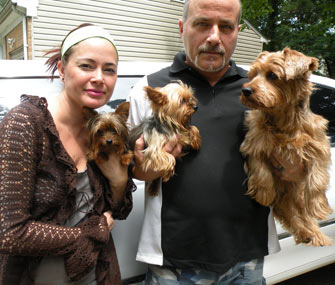 How Does the Stud Stopper Work?

The Stud Stopper creates a barrier between female and male dogs when the female is in heat. The waistband is strapped around the male in front of his genitals like a sturdy kind of loincloth with a vinyl back layer (in case of splattering while peeing). The dog is not uncomfortable, but he also can’t mate. The Moodys believe in spaying and neutering but also feel that breeders and even people waiting to neuter their pups during the first year need a solution. “The dog can still be himself. He can groom and use the restroom; he doesn’t care that it’s there because it’s not uncomfortable or in his way,” Tina explains. “There are other solutions but none that are quite right: You can put a diaper on a female or try doggy condoms. They even have chastity belts. Some people resort to using the potty-training belly band as birth control, but I don’t like that because the dog can’t pee.”

Tina credits David’s “engineering mind” with the creation of their product, but he actually has inventing in his blood. When a cousin was born without sweat glands, his mother worked with NASA to create a “Cool Suit” so that kids with such health issues could go outside and live more normal lives.

Despite the deceptive simplicity of the concept, it took about five years for the Moodys to perfect their design, using friends' dogs as testers. One challenge was the varied shapes of different breeds’ ribcages. Now the company offers Stud Stoppers in five sizes from extra small to extra large (for dogs from about 4 to 120 pounds). The product is available in at least eight natural colors from Coffee to Wheat on Amazon and StudStopper.com.