The Most Popular Boxer Names 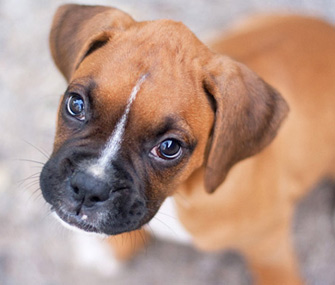 Anita Peeples, Animal Photography
Many Boxers are named after, well, boxers. Rocky and Tyson are popular monikers for the breed.

There's no mistaking the recognizably wrinkled mug of the Boxer — that furrowed brow and square jaw sets the breed apart from the rest of the canine crowd. But, do those distinguished looks translate to equally notable names?

To find out, we sorted through more than 485,000 Boxer names in our database, then compared the top Boxer names to the most popular puppy names of the year to determine which prevalent Boxer names appeared to be breed-specific.

As we've seen with other dog breeds (like Golden Retrievers, Bulldogs and more), many of the top 10 Boxer names corresponded to names that have been popular picks for puppies of all breeds: Bella, Daisy, Sadie, Maggie, Lucy, Molly, Rocky, Max, Duke, Buddy and Zeus can all be found on both top 10 lists, and Bailey, No. 8 for Boxers, barely missed the cut with the top puppy names list, coming in at No. 11.

However, that still leaves us with a bounty of Boxer names to consider, and we had a bit of fun figuring out just what made some of these names so popular for this particular breed!

Roxy (up 17 spots from the popular puppy names list), Roxie (up 42 spots) and Buster (up 21 spots): We think these names have a nice, Boxer-friendly ring to them.Roxy/Roxie the Boxer and Buster the Boxer just sounds great.

Ginger (up 21 spots):While Boxers come in a few colors, they're most commonly found with tan and brindle coats, both of which have a slightly reddish hue. And, when you've got a dog with red fur, what name could be more fitting than Ginger?

Rocky (up 4 spots) and Tyson (up 21 spots):Yes, Rocky was also on the top 10 puppy names list, but the fact that it was the No. 1 pick for Boxers makes it stand out nonetheless, and Tyson had quite the climb. It's obvious the popularity of these names is directly related to the famous human boxers (both fictional and real) sharing those names.

Jake (up 17 spots), Harley (up 21 spots) and Brutus (up 58 spots):Although the owners of Boxers know that this dog is more of a lover than a fighter, some Boxer fans still like playing up the breed's tough guy image, and these strongly masculine names are prime examples. Brutus was the biggest chart climber of the entire Boxer bunch, which we suspect is largely due to the macho sound of the name, but may also be due to the "B" sound, as well as the fact that Brutus the Boxer is a Beanie Boo.

Got a Boxer in your life with a name you'd like to share? Let us know in the comments.