Home ›
Our Pet Experts ›
The Rabies Threat: Fighting the Virus Abroad — and at Home

The Rabies Threat: Fighting the Virus Abroad — and at Home 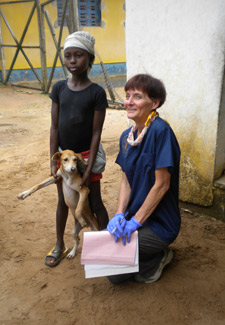 Veterinarians Without Borders
This little girl and her dog came to the vaccine clinic in Paynesville, a suburb of Monrovia, Libera. Dr. La Jeunesse reports that the Liberian children who came to the clinics were "very tender and caring" with their dogs.

In honor of World Rabies Day on Saturday, Sept. 28, Vetstreet veterinary advisory board member Dr. Carrie La Jeunesse recounts her recent up-close and personal experiences with rabies. Dr. La Jeunesse recently visited a developing African nation where fatalities from the dreaded disease are a tragic but all too common occurrence.

Traveling to Liberia, West Africa, this summer while working for Veterinarians Without Borders U.S., I became more intimately familiar with rabies than I would have preferred. It happened on only the fourth day into a monthlong mission I was leading, and during the first of several rabies vaccine clinics in some of the poorest communities on the globe. Our vaccine campaigns for dogs were part of a larger public health and international development effort in Liberia where VWB has an ongoing and long-term commitment to supporting redevelopment of veterinary care and reliable and healthy food sources. This effort is critical because virtually all of the country was destroyed during 14 years of civil war.

We were there during the rainy season, so imagine damp dogs, wet Liberians and wilting and steamy Americans. Gathered in unnaturally close quarters, the dogs were anxious and not all that easy to handle. Late in the afternoon on the day of our first clinic, I was bitten. The bite was very mild. The rabies concern was very real.

Little did I know, but back home in the U.S., rabies had been posing similar problems this summer all around the country.

One does not have to watch Cujo or Disney’s Old Yeller to find dramatic plot lines based on an all too real threat to public health. “Crazy like a fox” took on a whole new meaning when a rabid fox attacked people and a dog in New Jersey. And who would think that a miniature donkey at a county fair (New Jersey again) would be a rabies threat? In Washington state, bats were found to have rabies — one after biting a woman who was rafting and another after being dragged into the house by a cat. Thank goodness the offending animals were identified and tested so that the people exposed could receive post-exposure vaccines. That’s not always the case.

Because rabies is pervasive in Africa, people there are all too aware of the gruesome neurologic symptoms experienced by those infected. With only a handful of documented rabies survivors throughout all of recorded medical history, infection without immediate post-exposure treatment results in a 100 percent fatality rate. There is no cure. Some feel rabies is the most important zoonotic (contagious between animals and humans) disease in the world. Rabies is difficult to diagnose (brain tissue must be tested), and the most affected countries and communities have little access to laboratory facilities. Because of this, the estimated death rate from rabies (55,000 each year) is just that — an estimate. Most of those affected live in Asia and Africa, and 90 percent or more of those who die are bitten by rabid dogs. Of that number, more than 50 percent are children. Unlike in the U.S., where even in poor and remote communities there is access to life-saving post-exposure vaccines, in most of Asia and Africa, rabies is a death sentence.