Home ›
Our Pet Experts ›
Caroline Golon ›
The Things We Do for Love: "I Found a Special Way to Honor My Dog’s Memory"

The Things We Do for Love: "I Found a Special Way to Honor My Dog’s Memory" 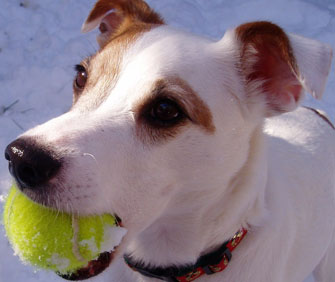 Dr. Katy Nelson was heartbroken when her 16-year-old Jack Russell Terrier, Charlie, passed away in 2011. But finding a special resting place for him brought her peace.

A veterinarian in the Washington, D.C., area, Dr. Nelson stays busy with her husband, two kids, a Labradoodle named Papi and a turtle named Tuck. But she’ll never forget Charlie. Nor will anyone else. “Everyone who knew him remembers him,” Nelson says with a laugh.

That’s because Charlie wasn’t the most well-behaved or friendliest of dogs. “He got kicked out of behavioral studies twice, he bit my boyfriends, and I spent thousands of dollars in training,” Dr. Nelson says. “But I loved him more than anything.”

Taking the Show on the Road

Dr. Nelson and Charlie were inseparable. After Dr. Nelson’s vet school graduation, the pair embarked on a road trip to 14 different states for job interviews. Later, they moved around for Dr. Nelson’s jobs. But she says that Charlie’s favorite place was Dr. Nelson’s parents’ home, acres of beautiful land just south of Alexandria, Louisiana.

“We’d pull up in the car, and I’d let him out and he’d be off like a shot within seconds,” Dr. Nelson says. “He’d go as far as he could to the back of the property, and all we could see was a little white streak running along the fence.”

The little white dog also loved the pond behind the house. “He’d disappear under water for 30 to 40 seconds and come up completely muddy!” Dr. Nelson says.

Because he suffered from kidney failure, Charlie couldn’t visit Louisiana the last few years of his life. “That was probably really sad for him,” Dr. Nelson says.