What Are Former Westminster Best in Show Dogs Doing Now?

Westminster Kennel Club Best in Show winners typically bow out of their show careers after taking the prestigious prize and go on to produce puppies, become therapy dogs or just master the art of sofa lounging. Here’s a look at how five past champs now spend their time.

2011 Winner: Hickory the Scottish Deerhound Has Babies and Chases Bears 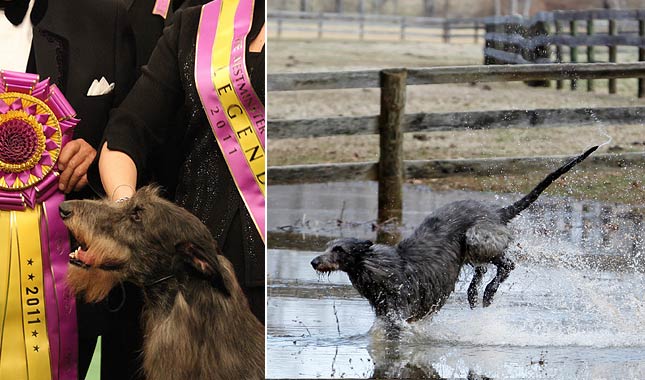 Motherhood was the path taken by GCh. Foxcliffe Hickory Wind, the elegant Scottish Deerhound owned by Dr. R. Scott and Cecilia Dove of Virginia. After becoming the first in her breed to take Best in Show in the history of Westminster, Hickory has since produced nine puppies, who are currently four months old.

When she's not playing with her pups, Hickory runs for miles every day on the family farm, located in the foothills of Virginia's Blue Ridge Mountains. Although she's normally calm and serene, once outdoors, Hickory turns into a keen coursing dog, who has even been known to drive a bear up a tree.

“We live in wide-open territory, so there are lots of places for her to run and, of course, lots of things for her to chase,” says Dr. Dove, a veterinarian who specializes in theriogenology, the science of breeding.

Will Hickory have another litter? “She might be bred again,” says Dr. Dove. “She’s a very healthy bitch.”

2010 Winner: Sadie the Scottish Terrier Kicks Back at Home 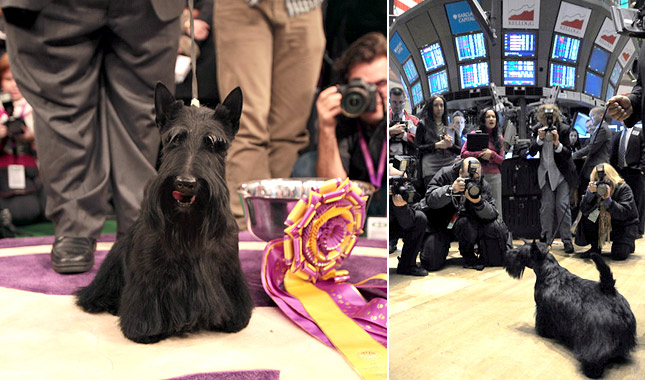 In 2010, not only did Scottish Terrier Ch. Roundtown Mercedes of Maryscot — Sadie for short — take Best in Show at Westminster, but she also won the National Dog Show and the AKC/Eukanuba National Championship, a rare feat in dog show circles. Sadie, who was bestowed the nickname “Hottie Scottie” by the New York Post, embarked on a post-show media tour that included stops at the Empire State Building, a visit with Donald Trump and a chance to paw the opening bell at the New York Stock Exchange.

As with many champions, the next stage for Sadie involved puppies. She gave birth to five pups in March 2011, an event that was closely followed by terrier fans. The Scottish Terrier and Dog News blog even reported when Sadie’s “baby daddy” Winston was chosen.

Since then, Sadie has become more of a homebody, living with handler Gabriel Rangel in Rialto, Calif. It's been reported that Sadie enjoys watching her favorite TV channel — Animal Planet, of course. She also relishes curling up in a dog bed with Rangel’s Chihuahua, Tad, and snacking on her favorite treat: hot dogs.

Sussex Spaniel Ch. Clussexx Three D Grinchy Glee recently celebrated his thirteenth birthday. At age 10, he was the oldest dog to take the top title at Westminster — and he was the first of his breed to do so.

These days, Stump, as he's nicknamed, is enjoying a well-deserved retirement with handler Scott Sommer of Texas. In other words, this lucky dog does pretty much whatever he wants, which mainly means hanging out with pal J. R. (Ch. Special Times Just Right), the Bichon Frise who won Best in Show in 2001.

“They get a lot of attention here, and they’re happy with life,” says Sommer. “Stump doesn’t hear quite as well, but he eats like a horse and never misses a meal.”

2008 Winner: Uno the Beagle Reflects on Past Glories

Beagle Ch. K-Run’s Park Me in First, better known to the world as Uno, had one of the busiest post-Westminster lives. Accompanied by Westminster announcer David Frei, Uno crisscrossed the country as an ambassador for his pet cause: canine therapy work.

He also “threw” the first pitch at baseball games, and made appearances at art gallery openings and charity fundraisers. He rode on a float in the Macy’s Thanksgiving Day Parade, flipped the switch at the Empire State Building to turn on its purple and gold lights to celebrate Westminster Week in 2009 — and even visited the White House.

Since his Beagle Across America tour concluded, Uno has simply lived the life of a dog says co-owner Eddie Dziuk, chief operating officer of the Orthopedic Foundation for Animals. “He lives with his co-owner, Caroline Dowell, and he’s a full-time house dog,” says Dziuk. “He sleeps in her bed, and hangs out with other Beagles.” 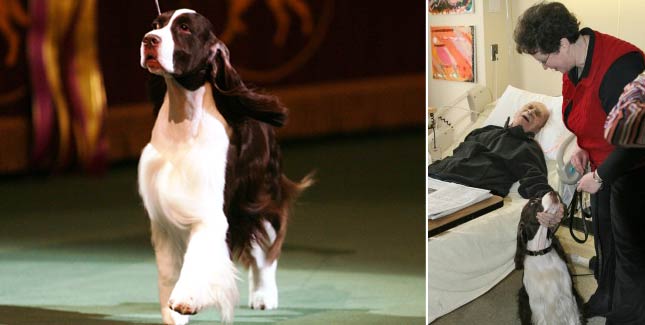 English Springer Spaniel Ch. Felicity’s Diamond Jim (James to his friends) was nearly seven years old when he won Best in Show, making him one of the oldest Springer Spaniels to take top honors at Westminster.

After his win, he focused on a career in pet therapy with his owner, Teresa Patton, of Amissville, Va. The duo worked with Angel on a Leash and other pet therapy organizations, as well as raised nearly $15,000 for the Alzheimer’s Association by doing memory walks. “James had been doing pet therapy since he was seven months old, and he and I just picked up where he left off,” says Patton.

In his spare time, James finished four rally titles and his first obedience title. He died last May, at age 11, from an aggressive form of lymphoma. His loss is still raw, says Patton, but his memory lives on in her garden, which is planted with purple and gold roses and sprinkled with his ashes.

She will soon have a more tangible remembrance in the form of a litter due in March that was accomplished via a surgical implant. “We’re very excited about the prospect of having children from him this year,” says Patton. “He’s still with us in many ways. People still comment on how charismatic he was, and what a profound impact he had. It reached far beyond the show ring, which is pretty amazing.”

The Westminster Kennel Club Dog Show Presented by Purina will air February 13 and 14 on the USA Network and CNBC. Click here for full viewing details.