Home ›
Our Pet Experts ›
Caroline Golon ›
What Should You Do If You Find a Bunny Nest?

What Should You Do If You Find a Bunny Nest? 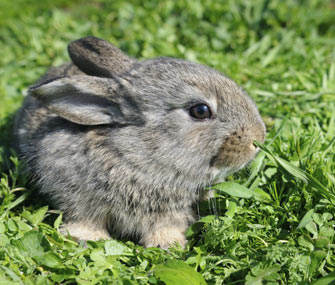 Thinkstock
Eastern cottontails are the most common species of rabbit in the United States.

If it seems like you’re seeing rabbits everywhere these days, you’re not imagining it. Rabbit mating season usually runs from March through September, so now’s the time when people stumble upon nests of baby bunnies.

But often those who find nests aren’t sure what to do. “We get these calls quite a bit,” says Gary Comer, a wildlife management supervisor at the Ohio Department of Natural Resources Division of Wildlife. Comer and his team offer the following advice to help baby rabbits have the best chance at survival.

Eastern cottontails, the most common rabbit species in the United States, build shallow nests of grass and fur in grassy areas near bushes or trees and often right out in the open.

People may be surprised that a rabbit would build a nest for her babies in the middle of a yard, but it’s actually pretty genius. Most predators won’t venture into an open space, so it’s pretty safe.

The trouble is, even people with a keen eye don’t always see a nest until they are on top of it. Nests look like little piles of messy grass among the regular lawn or vegetation. Sometimes adults come across a nest, but often kids or pets are the ones to find the babies.

Should I Move a Nest of Baby Rabbits?

If you’ve discovered a nest that’s been disturbed, take a peek at the babies. Unless the little rabbits are visibly injured (bleeding or nonfunctioning limbs, for example) or obviously suffering, it’s best not to touch or move them, Comer advises. Cover the nest and leave the babies alone.

Well-meaning people may assume a nest has been abandoned because the mother rabbit isn’t there, but that’s probably not the case. Mama rabbits are smart and visit their nests only when absolutely necessary to avoid drawing attention to it, Comer says. The mother is probably somewhere nearby and will return when it’s time for the babies’ feeding and grooming, usually in the morning and evening.

And don’t panic if you or your child touches the bunnies. It’s a myth that a mother rabbit (and many other wildlife mamas) will reject their babies if they have a human scent on them. Just cover the nest and don’t touch the babies again; handling the little ones can cause injury and stress.

What Can I Do to Help Baby Rabbits?