Home ›
Our Pet Experts ›
Dr. Donna Spector ›
What You Need to Know About Recurrent Urinary Tract Infections in Dogs 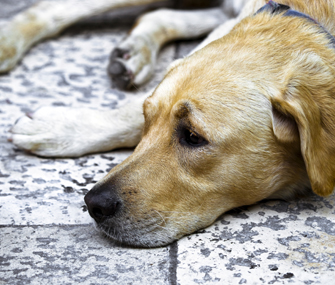 Abby is a 4-year-old, spayed Labrador Retriever who suffers from recurrent urinary tract infections (UTIs). For six months, she had to urinate frequently, and she gave off an odor.

When Abby's owner spotted blood in her urine, she took her to the veterinarian, who diagnosed her with a UTI. Her symptoms improved quickly once she was on antibiotics but then returned shortly after she stopped taking the medication.

Her veterinarian prescribed another antibiotic, and her bladder issues again seemed to resolve completely — until a month later, when the blood was back.

Abby’s story is not uncommon. Dogs with recurrent UTIs are a source of frustration for both owners and veterinarians.

Here's a look at why it happens — and what veterinarians will do to combat the problem.

How Does a Recurrent Urinary Tract Infection Differ From a Regular UTI?

The bladder acts as a storage area for urine once it's been made by the kidneys. Although the bladder is sterile and free of bacteria, the external genital area contains a large amount of germs. If these bacteria gain entry into the bladder, and begin to grow, an infection can occur, resulting in the symptoms of a UTI.

Most dogs get simple UTIs, which develop once and can be treated easily with a short course of antibiotics. But dogs who experience more than three UTIs per year — or more than two UTIs in six months — are defined as having chronic or recurrent UTIs.

What Are Common UTI Symptoms?

If you notice any of these symptoms, take your pet to a veterinarian, who will likely recommend a urinalysis (UA) and a urine culture to make a proper diagnosis. The UA may give clues to underlying conditions, but a urine culture is the only test that can confirm a UTI, as well as identify the type of bacteria in the bladder, so a veterinarian can administer the right antibiotic.

If a dog is experiencing her first UTI, a vet may only collect a UA and prescribe an antibiotic. But if a UTI is recurrent or an underlying condition is present, a UA and a urine culture should be performed.

Why Do Dogs Get Recurrent UTIs?

UTI symptoms often resolve within two days of starting an antibiotic treatment, but some owners do not give the entire course to their pets as prescribed, which can lead to recurrent UTIs.

In other instances, if a urine culture was not performed, an inappropriate antibiotic may have been prescribed or the dosage and duration were insufficient to fully clear the UTI.

To ensure that a UTI is gone, veterinarians will usually recommend another urine culture five days after the last antibiotic dosage is given.

There are also several underlying medical causes of recurrent UTIs: