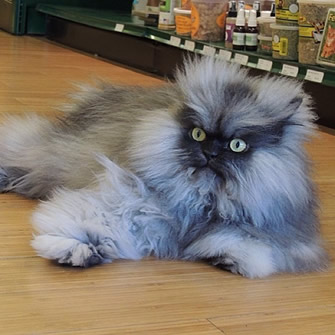 Credit: colonelmeow, Instagram
Colonel Meow, who passed away earlier this year, had a unique look that paired perfectly with his owner's (or Slave-Beast's) humorous voice.

Animals with their own fan clubs aren't anything new. In the years before the Internet, animals sometimes became famous for a role in a TV show or a movie. But more often than not, it was the character who was famous rather than the animal himself. Everyone knows Lassie, for example, but only true fans know that he was first played by a dog named Pal. These days, though, that's far from the case. It seems like every time we log in to Facebook or Instagram or YouTube, a new Maru or Mishka is stealing our hearts (and our page views), but these animals aren't actors with handlers and a PR firm ready to frame their everyday activities in a rosy light. No, these are simply people's pets who happened to go viral.

Enthusiastic Instagrammers and bloggers create and maintain their pets' online image by consistently delivering adorable photos, witty captions and funny videos featuring the furry star. But social media popularity can come at a price: When an Internet-famous pet becomes ill or dies, the human behind the image has a responsibility to break the bad news to fans and followers.

Holding Back Before Moving Forward

Each pet owner deals with loss in a different way, whether that pet is famous or anonymous. When Colonel Meow — known to his fans as "the world's angriest cat" — passed away in January at just 3 years of age, his owner, Anne Marie Avey, initially provided his followers (or Minions, as they are affectionately known) with only the most basic information about his death: "Colonel Meow passed away yesterday evening," Avey wrote on Meow's official Facebook page. "I will post more about the details when I've had a few days to grieve. Thank you so much for your understanding, Minions."

Nearly a month later, Avey spoke openly and emotionally in a Google Plus Hangout about the cat's passing, describing his struggles with a genetic heart condition, his fight against kidney failure and his subsequent death due to cardiac arrest. In the Hangout video, now accessible on YouTube, she credits Meow's fans with helping her get through the grieving process. She was able to get back to normal life in part, she says, because "I saw how much you guys were hurt as well. You felt my pain. You knew what I was going through. ... All the love and support, I saw all of it. All of the messages, I read all of them."

Avey plans to continue sharing images of Colonel Meow, but she is quick to point out that it's coming out of a good place, not because she's "wallowing in her own tears or pity."

"He brought so much love and joy to me, and I have so many pictures that I still want to share," she told fans in the Google Plus Hangout. "I still look at a picture and I laugh. Those eyes, that attitude, it's hilarious to me." She clarified, however, that she would no longer be posting in Colonel Meow's voice.

The angry-looking cat will live on in another way as well: Avey will donate money from the GoFundMe account she started when Meow was hospitalized to Cats in Crisis to help other cats with problems like Meow's. 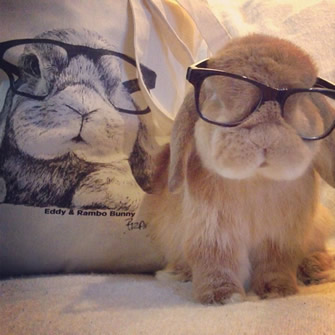 Credit: BunnyMama, Instagram
Rambo was the original hipster bunny (with the fans and products to prove it).

Sharing It All From the Beginning

Sometimes owners of Internet-famous pets don't have time to plan for their animals' demise. Rambo, one-half of Instagram user BunnyMama's floppy-eared rabbit duo, passed away in December after suffering several strokes over the course of about two and a half weeks. His owner, who wishes to keep her real identity anonymous, was up-front with her Instagram followers about Rambo's issues and her own sorrow from almost the very beginning. Two days after the first stroke, she posted this picture, stating that Rambo had had a stroke and had lost the use of his legs and that they would take him to the vet and hope for the best.

"I treat our followers like they are a part of our family. Our account is very intimate. It is a glimpse into my home, my life with my bunnies and the love I have for them," BunnyMama told us.