Home ›
Our Pet Experts ›
Mikkel Becker ›
When Will My Puppy Start to Bark?

When Will My Puppy Start to Bark? 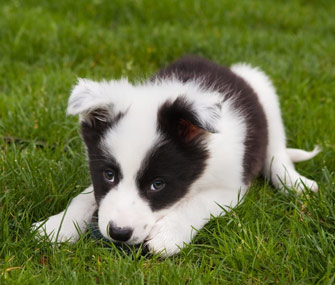 Q. My Border Collie gave birth to a puppy who is now 1 month old. She doesn’t bark yet, just whines. When will she start to bark and be more vocal?

A. Your puppy is around the age where she has the potential to begin using her vocal cords. Canine vocalizations usually begin around 2 to 3 weeks of age, following the period where a puppy’s eyes and ears are opened. Your puppy’s first vocalizations may be grunts and whines; around seven or eight weeks, these will develop into yips and barks, although some dogs wait until closer to 16 weeks to start barking.

Some dogs vocalize from the first possible moment, while others become more communicative as they mature. Some dogs, however, remain relatively quiet throughout their lives.

Barking is a dog’s way of communicating. Puppies bark for a variety of reasons; to express excitement during play, for example, or to tell you something — maybe she needs to go outside to potty or she wants you to be a little quicker with her dinner. She may bark in anticipation when you hold a coveted toy just out of reach. Puppies also quickly learn that barking earns them attention, like treats or petting, from those in their immediate surroundings. Be careful not to reward attention barking, however, as it can become a lifelong bad habit.

Dogs can learn barking behavior from other canines. If you have an older dog that barks when the doorbell rings, there’s a good chance that your puppy will follow suit. Your puppy can also pick up barking behavior from neighborhood dogs — ever notice how one dog barking at something can incite others on the block to bark along? Even a dog barking on TV or a human pretending to bark can encourage barking from a puppy. Certain sounds such as sirens or even high-pitched music may also spark a bark or howl from your puppy.

During your puppy’s socialization period, which lasts from about 6 to12 weeks of age, she may bark at anything unfamiliar, including people and noises. Your puppy may repeat this behavior at a later period, starting at about four to six months of age. As your puppy becomes more comfortable in her home and develops territorial behavior, her barking may also become a way to ward off intruders, or warn you when someone approaches your house.

Border Collies exhibit varying levels of vocalization. Many Border Collies are powerful vocalizers when they are excited over a situation, such as play. Border Collies lacking proper socialization as puppies or with a tendency toward fear may also vocalize when they are alarmed by a potential threat; in very fearful dogs, even a seemingly nonthreatening stimulus can incite this response.

Many Border Collies are highly alert to changes in their environment and may vocalize at small things that most of us would miss, like a butterfly landing on the porch. On the other hand some Border Collies are quiet observers. These Border Collies stalk and herd in silence, rather than raising a ruckus barking at things.

Your dog may just be the quiet type, which is a welcome fit for most homes. I’m guessing, though, that as your dog develops confidence and has more experience with people and other dogs, she will start to vocalize. If she never barks, or only barks infrequently, keep in mind that a quiet dog is still a normal dog — it is simply likely that she doesn’t have the genetic tendency or the external motivation to be a barker.