Home ›
Our Pet Experts ›
Linda Lombardi ›
Where Do Outdoor Cats Go? A GPS Tracking Study Can Tell You

Where Do Outdoor Cats Go? A GPS Tracking Study Can Tell You

Thinkstock
Researchers running a new GPS tracking study want to learn more about where cats go when they're outside on their own.

If your cat goes outdoors, you wonder where he goes when he's out of sight. Katie Burke says of her cat Banjo, "When she was a teenage cat, she used to come home smelling like cigarettes and perfume. I used to wonder where she had been and kind of gave her a hard time about cheating on me."

Likewise, Becky Antworth and her husband couldn't help but be curious about Roukus' travels. "We seem to constantly be meeting neighbors where the reputation of our cat precedes us," she says. "We'll start talking to them and they'll say, 'Oh, you don't have a black cat, do you?' 'Yes, that's our cat.' "

Scientists wonder, too, although for different reasons — and now you can help them and possibly answer some of your own questions at the same time.

There was a time when most people let their pet cats wander outdoors. Now experts recommend cats live inside for their own safety, but the ones who still go out are at the center of a controversy: A 2012 article in the journal Nature Communications estimated that roaming felines kill between 1.3 billion and 4 billion birds a year in the United States.

Researchers at North Carolina State University are at the start of what is already the largest GPS tracking study of pet cats, in hopes of learning more about their interactions with wildlife. Dr. Roland Kays says, "What we don't know is where they're doing this hunting. That's important, because if they're hunting in backyards and other developed areas, that might be less of a concern than if they're getting into our protected areas and parks and other areas that might have more sensitive species."

So they're hoping to recruit owners all over the country for the Cat Tracker study, as well as collaborating with researchers in Australia and New Zealand.

Cat owners who've volunteered to participate have found out some interesting things about where their cats hang out.

"There are certain houses that now I know that she frequents," Burke says. "It's funny to know she's got her own friends and her own social life when I'm gone to work during the day. One good friend said that she didn't know Banjo was hanging out by her house — she has her own cat, and they're like frenemies. There's one other house I noticed she was frequenting. I was kind of happy she was going there because they lost their cat a year ago. I thought maybe she's keeping them company." 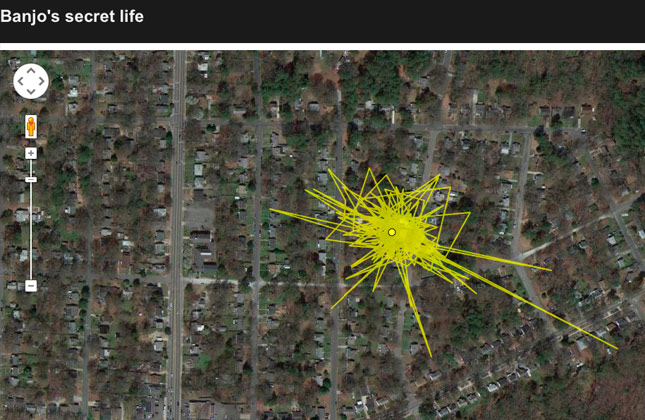 Cats.yourwildlife.org
This Cat Tracker map shows Banjo's journey while she was wearing a GPS tracker.

Like the researchers, owners are curious about the distance cats go. Kays says that although they haven't yet done formal analyses of range sizes, cats don't go very far most of the time. "Most of them of them go two houses away, on average," he says.

Burke's cat goes a little farther than that, but she was still relieved that it wasn't as far as she thought it might be. "I was really glad that she doesn't cross any major roads — except [for] now and then, she stays in the blocks around my neighborhood, about two blocks around me on all sides."