Home ›
Our Pet Experts ›
Linda Lombardi ›
Where Do Outdoor Cats Go? A GPS Tracking Study Can Tell You

Where Do Outdoor Cats Go? A GPS Tracking Study Can Tell You

There are exceptions to the rule that cats stick close to home, though, which can be interesting to both owners and scientists. Antworth says that her cat will walk along the beach with her for almost a mile, and apparently she's just as happy to make such long treks on her own.

"It was definitely a surprise to see how far she was going away from home, how much she was going into other people's yards and around others' homes, and just how active she was — how much time she spends making circles around the territory," she says. 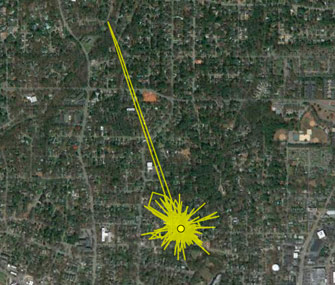 Cats.yourwildlife.org
Chicha's tracker map shows that she spent an entire day at her old home a mile away.

Even cats who are usually homebodies sometimes go on longer jaunts. Cat Tracker team member Troi Perkins' favorite story is about Chicha, who belongs to Rob Dunn, another faculty member. "This cat is 14 years old, and they had always mentioned that she seemed like she just laid around the backyard and seemed kind of skittish about outdoor things," she says.

When they got Chicha's data, there was one trip so far away that they assumed it had to be an equipment error, but Dunn looked at the map and saw that Chicha had gone to a house where they used to live.

"The cat had gone a mile away and hung out the entire day at their old house," Perkins says. "It's really cool from a scientist's perspective — cats really can remember stuff from a long time ago, and they have this spatial memory." And from the cat owner's perspective, it's interesting too: Perkins says that Dunn's reaction was, "I wonder what kind of memory she has about the old house? Does she have cat friends she goes and hangs out with?"

The data the team is collecting has the potential to contribute to the study of other questions about animal behavior and cognition. "As we get a big enough sample, we'll get enough of these anecdotes that we'll be able to piece together some interesting results about animal movement in general," says Kays. "About how animals learn about their environments and how memory affects their behavior."


Why Stay Close to Home?

When you're studying what might affect the movements of cats, it's important to remember that they are not just predators, but also potential prey. Coyotes are big enough to catch cats, and Kays counts even owls as predators after doing a little experiment.

"We were curious what would attack a cat, so we went to Toys R Us and bought a cat robot, and stuck it in the woods with a camera trap on it, " he says. "An owl flew down and tried to carry it away."

Predators may be having an effect on keeping cats away from more sensitive natural areas. "There's two main ways that predators can affect the prey species," Kays says. "One is direct: They can kill them, and that can reduce the population. But there are also indirect effects, generally classified as fear effects: They change the animals' behavior. They don't want to go into the scary woods because there's coyotes in there."

To test these effects, the study's leaders are particularly looking to get volunteers on Long Island, New York. It's the only place left in the continental United States that hasn't yet been colonized by coyotes, since it's difficult for them to get there with New York City in the way.

"Everyone figures it's a matter of time before they get there, but right now Long Island is coyote free, and we want to try to get the 'before' data so we can compare it to the 'after' data," Kays says.