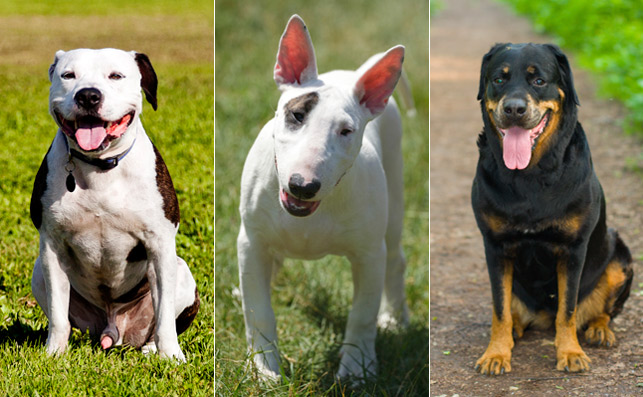 Thinkstock
The American Staffordshire Terrier, the Bull Terrier and the Rottweiler are frequent targets of breed-specific legislation.

"We don't support breed-specific legislation — research shows that bans on certain types of dogs are largely ineffective and often a waste of public resources," it reads.

Siding With the Studies

The memo points to a Centers for Disease Control report that, after studying 19 years of data on dog bite-related deaths, recommends against bans on specific breeds. In the 238 fatalities it studied, "Pit Bull–type dogs and Rottweilers were involved in more than half of these deaths."

In spite of those alarming statistics, the study continues, fatal attacks represent such a small proportion of dog-bite incidents that this data "should not be the primary factor drivingpublic policy concerning dangerous dogs." The study's authors also point out that because it's so difficult to be completely sure of a dog's breed, enforcing breed-specific bans would raise "constitutional and practical issues."

A similar study from the American Veterinary Medical Association's Task Force on Canine Aggression and Human-Canine Interactions acknowledges the same issue: That even if statistics on dog-bite attacks could be assigned to certain breeds, local ordinances banning those breeds would essentially be impossible to accurately enforce. Here's what that report says:

"Breed-specific ordinances imply that there is an objective method of determining the breed of a particular dog, when in fact, there is not at this time. Owners of mixed-breed dogs or dogs that have not been registered with a national kennel club have no way of knowing whether their dog is one of the types identified and whether they are required to comply with a breed-specific ordinance. In addition, law enforcement personnel typically have no scientific means for determining a dog’s breed that can withstand the rigors of legal challenge, nor do they have a foolproof method for deciding whether owners are in compliance or in violation of laws. Such laws assume that all dogs of a certain breed are likely to bite, instead of acknowledging that most dogs are not a problem. These laws often fail to take normal dog behavior into account and may not assign appropriate responsibilities to owners."

The White House statement itself appeared on the We the People page, a platform that hosts petitions, which, if they generate enough responses, can elicit an official response from the policy experts at the White House.

Part of the response argues that breed bans won't deter the people who intentionally raise aggressive dogs — they'll just move on to a new breed that hasn't yet been regulated by their local laws. The most promising way to prevent dog bites, the memo contends, is through education and "a community-based approach."

That type of community-based approach — like education and incentivizing spay/neuter — is exactly what the ASPCA champions to help reduce dog-attack numbers.

"It was bold, and definitely sound, for the White House to make the statement that it did," Nancy Perry, the ASPCA's senior vice president for government relations, tells Vetstreet. "When we hear strong, affirmative federal policy statements that make good sense, that are grounded in science, that demonstrate cost-effectiveness and humaneness, it's pretty hard for any community to ignore that."

What's more, Perry says, is that the unintended consequences of breed bans may cause formerly responsible owners to turn on the basic, fundamental standards of pet ownership. These people aren't just going to surrender their dogs — instead, they'll try to avoid detection by restricting their dog's outdoor exercise, avoiding microchipping and maybe even neglecting veterinary care.

"Trying to identify a breed by eyeballing that dog is incredibly reckless. Obviously many, many dogs are crossbreeds or multiple breeds, and it's very hard to differentiate between them just by looking at a dog, or even by the dog's behavior. Even genetic tests are questionable."

While proponents of breed-neutral legislation are sure to appreciate the Obama administration's statement, it's hardly the end of the story. The question remains: Will this lead to federal legislation against breed bans, trumping contentious laws in places like Maryland, Denver and Miami?

Says Perry: "We'll certainly be keeping our ear to the ground on that."