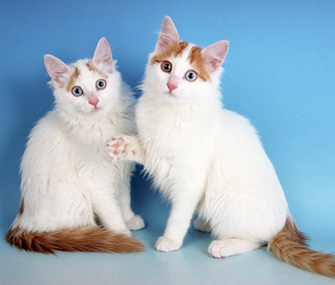 Alan Robinson, Animal Photography
Don't be surprised if your Turkish Van tries to join you in the bathtub; the breed is known as the "swimming cat."

The Turkish Van is considered a regional treasure in his homeland of Turkey. It’s for good reason: He stands out with his “van” coloration — white with color on the tail and head — and his gorgeous eyes, which can be blue, gold or odd, meaning one eye is blue and the other is gold. Many even have a small mark between their shoulder blades, called the “thumbprint of Allah,” that's considered a sign that the cat has been blessed. Learn more about the Turkish Van and why he might be the right cat breed for you.

Just call him the feline Michael Phelps. This cat usually loves the water. It’s not unusual to find him splashing in pools, ponds or even your bathtub or toilet. Historically, Vans were known to swim in Turkey’s Lake Van.


They can be energetic.

You may want to hide your breakables if you’ve got a Van in the house. This typically active and athletic cat often likes to jump, climb, run and play. And he’s not known for sitting still for very long. He’s also prone to acrobatics — you may find him turning somersaults and catching toys in mid-air.

Their tails aren’t so telltale.

Much like the rest of the rest of his body, the Turkish Van’s tail is usually in constant motion. Most cats flick their tails when they’re angry or upset, but the Van’s tail seems to be moving even when he’s happy, which can be most of the time.


They can be affectionate.

While the Van doesn’t necessarily love to be carried around and cuddled, he’s typically a friendly cat who enjoys being petted. He may also enjoy following you around the house.

The Van is typically intelligent and often enjoys learning tricks and playing with puzzle toys that will reward him with kibble or treats when he manipulates them correctly.