Why Does My Cat... Kick Her Back Legs? 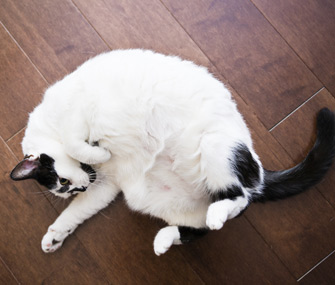 Thinkstock
Cats sometimes kick out their rear legs to engage in play behavior, such as wrestling.

Have you ever reached out to pet your cat only to have her roll onto her back, wrap her forelimbs around your hands, and attempt to kick at you with her hind legs? This behavior can seem startling, but there are a couple of reasons she does it.

Cats sometimes kick with their hind legs when they are engaged in play behavior, such as wrestling. They will also exhibit this behavior when they are fighting or feel defensive and want the other party to leave them alone.

When a cat is about to be attacked or is attacked, she will roll onto her back. In this position, the cat can use all four paws for defense. The cat will grab the opponent with its forelimbs and use the claws on its hind limbs to kick at or rake at the exposed abdomen/underbelly of its opponent. Most cats in the wild do not want to fight for extended periods of time — they want a quick strike or defensive move in order to inflict pain or injury to the other party so that the other animal will retreat.

If your cat reacts this way to you when you are attempting to pet her, it can sometimes mean she is trying to play. Certainly when you watch cats or kittens playing with each other, they will perform this same behavior, although not with the same intensity as when fighting. Cats typically do not inflict injury on each other when playing. However, a cat can unwittingly inflict scratches on a person’s hand or arm due to a human’s lack of fur.

Keep in mind, though, that cats may perform the same behavior when they feel defensive or want the owner to stop petting them. Aggressive behavior is distance-increasing behavior, meaning that a cat who rolls onto her back, grabs your hand with her forelegs, and aggressively rakes her hind legs against you is likely saying, “Stop!” Also keep in mind that a cat rolling onto her back may not necessarily want you to pet her belly. Cats roll onto their backs to indicate how comfortable they feel around a person or another cat, meaning they do not feel threatened. It’s a good idea not to take advantage of that trust by trying to give her a belly rub.