Home ›
Our Pet Experts ›
Linda Fiorella ›
Why Does My Cat... Not Cover Her Poop?

Why Does My Cat... Not Cover Her Poop? 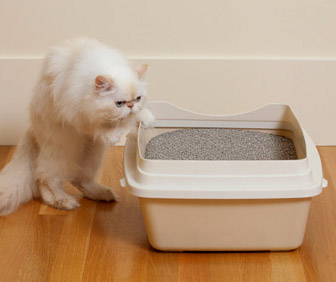 Most felines have a knack for depositing their pee and poop in one spot, which they then cover up from prying eyes. So why is it that some cats dislike the idea of concealing their feces? Two experts weigh in to give us the scoop on kitties who refuse to hide their poop.

Dr. Melissa Bain, assistant professor and service chief of the Companion Animal Behavior Service at the UC Davis School of Veterinary Medicine, says the exact reason why felines cover their feces isn't fully understood, but one theory speculates that the behavior developed to prevent parasites from becoming more prevalent.

Could Not Covering Poop Be a Medical Problem?

Although Dr. Bain says that there's no specific medical reason why a cat would not cover her waste, she stresses that “any medical condition that could cause pain or pain associated with the litterbox, such as a urinary tract condition, could cause a cat to not want to spend time in the litterbox.”

Dr. Katherine Houpt, a certified applied animal behaviorist at Animal Behavior Consultants of Northern Michigan, agrees with Dr. Bain, adding that cats who have recently been declawed or who have a painful paw infection could be averse to scratching and covering their waste.

Could Not Covering Poop Be a Behavioral Issue?

“Primarily, it is behavioral,” says Dr. Houpt, who has specialized in animal behavior for more than 30 years. But there could be several reasons behind it.

Lax cat parenting may be one culprit. Dr. Bain says that some cats never learn as kittens to cover their waste.

Another reason: Certain cats will not cover their waste because they prefer to eliminate in their own territory, Dr. Houpt explains, noting that even an indoor cat who's lived in the same place for a long period of time still may not feel as though the home is truly her territory. “Some experts feel that a dominant cat will not cover," Dr. Houpt says. "The smell lets other cats know ‘I’m here.’ ”

For some felines, the litterbox itself can be an issue. “It could be the 'wrong' kind of litter for that cat, or it may be too dirty,” says Dr. Bain. "It may even be that the litterbox is too small for the cat to adequately turn around inside.”

Dr. Houpt admits that this isn't the worst problem a cat owner can have, but there may be ways to combat it. Once you and your vet have ruled out any medical issues, such as tender paws or painful elimination, you can start by trying out different types of cat litter.

In the case of multiple-cat households, adding more litterboxes throughout your home might also help because it increases the number of territories. In fact, having more than one cat can actually be a benefit. “Sometimes one cat will cover for another cat,” says Dr. Houpt.

READ MORE: Cats, Cat Behavior, Litterbox, Living With Pets, Why Does My Cat

READ MORE: Cats, Cat Behavior, Litterbox, Living With Pets, Why Does My Cat