Home ›
Our Pet Experts ›
Colleen Oakley ›
Why Does My Dog... Curl Up in a Ball When He Sleeps?

Why Does My Dog... Curl Up in a Ball When He Sleeps? 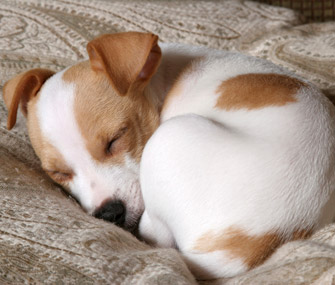 It’s nighttime and your pup nestles snugly in his bed, rolled up tight like a drum.

It’s a common slumber position for dogs, but why? Wouldn’t it be more comfortable to stretch out while catching some shut-eye?

But there are two valid reasons why your canine rolls up in a ball to snooze — and they both relate to evolution.

“When dogs sleep in the wild, especially where it’s cold, they’ll dig a nest and curl up into it,” Dr. Gruen says. “This gives them warmth — tucking into a ball conserves body heat. It also protects their most vulnerable organs in the abdomen from would-be predators.”

So if your pooch sprawls out to nap — instead of curling up — he’s either hot or he feels very safe in his environment.

If a dog is in unfamiliar territory, he will revert back to the instinct-based, curled-up sleep position.

For this reason, whenever you bring a new pup home, you’ll want to give him enough space to acclimate to his foreign surroundings.

Another tip from Dr. Gruen: Consider getting him a blanket. “This way, he can ‘dig’ a nest with the bedding material before he lies down,” she says, “instead of digging a place to nowhere on your carpet or couch.”