Why Does My Dog... Lick and Chew His Feet? 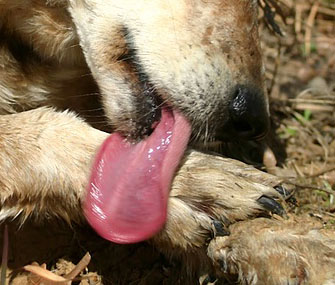 Plenty of owners observe this common behavior in their dogs and wonder if they should be concerned. In some cases, dogs will gently but insistently lick one or both paws, but other canines will go so far as to chew on their toes, which can be disconcerting for any pet owner.

So should you be worried?

The short answer is yes. You should always consult with your vet about this behavior, especially if it comes on suddenly, persists for long periods of time, or is accompanied by redness, swelling, odor, bleeding, limping or other possible signs of pain and infection.

Although most dogs engage in this behavior occasionally for unknown reasons, others are prone to lick or chew their feet excessively. In these cases, the feet (especially of light-colored dogs) will often look stained a pink or rusty color, which is the result of chronic contact with porphyrin pigments found in saliva.

There are a variety of reasons why your dog would suddenly lick or chew his feet, including puncture wounds to the toes or paw pads, fractured claws or toes, burns, corns (especially common in Greyhounds), and foreign bodies that may be lodged between the toes, such as ticks, grass awns and burrs.

Canines will also engage in this behavior due to other, more serious causes, such as interdigital cysts, tumors and other cancers, allergic skin disease and autoimmune diseases of the nail beds or paw pads.

Allergic skin disease is the most common reason why canines lick and chew their feet on a chronic basis. Food allergies, in particular, are typically the culprit, and secondary infections from yeast and bacteria can further exacerbate the behavior.

Many dogs who lick and chew their feet over long periods of time will also do so because it apparently feels good to them. In these cases, vets look for an underlying nonbehavioral disease that may have initially triggered the obsessive behavior. For example, dogs with lick granulomas — wounds caused by obsessive licking of the tops of the feet and lower limbs — may have been initially drawn to lick the area because of an injury, simple itch or a reaction to an allergen.

Regardless of the cause, if you notice that your dog is licking or chewing his paws, seek veterinary advice, especially since most of these cases are treatable if addressed by a professional early.