Home ›
Our Pet Experts ›
Dr. Laurie Hess ›
Why Does My Rabbit… Eat His Poop?

Why Does My Rabbit… Eat His Poop? 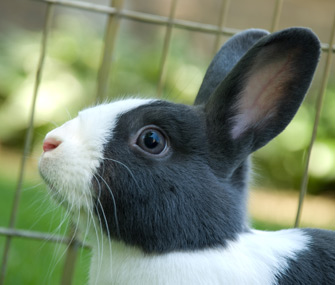 Thinkstock
You shouldn't be too concerned if your rabbit eats his poop. In fact, it's a normal and healthy rabbit behavior.

It may seem gross, but rabbits normally eat some of their feces once a day, either early in the morning or late at night.

These special feces are called cecotropes, or “night feces.” They are produced through fermentation of food in the part of the rabbit’s digestive tract called the cecum. Cecotropes are soft feces that are nutrient-rich and are passed out of the body like normal stool but then are re-ingested later by the rabbit so that important nutrients can be reabsorbed. These feces have more protein, less fiber and higher levels of certain vitamins, such as B vitamins, than the typical hard bunny fecal pellets you might see in the litterbox or around your rabbit’s cage.

While owners are often disturbed when they see their pets eating their own feces, realize that cecotrope ingestion is a normal and important part of rabbit behavior that will help keep your pet healthy. Owners should not try to prevent their rabbits from eating these feces and, since cecotropes are only passed once a day, there is little chance that an excessive amount could be consumed.