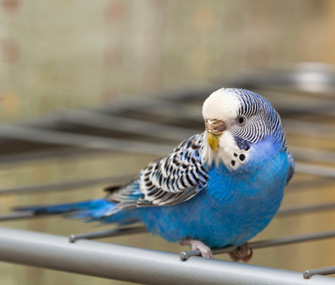 A bird can generally learn to speak by repeating what it hears, but it can be hard to get some birds to talk. While certain birds (African gray parrots, Amazon parrots, mynah birds) are known for their abilities to learn human language, others will never learn to speak. However, many species can be taught to speak, even just a few words, with enough practice.

Before trying to teach your bird to talk, you should certainly make sure she has a thorough exam by an avian-savvy vet to ensure that she is healthy.

Teach Your Bird to Talk

The best way to teach your bird to talk is to start with a simple, short word and repeat it, in the same tone, over and over to the bird. When your bird starts to mimic the word (even if it’s just a recognizable attempt at the word and isn’t a completely clear replication), immediately reward her. Rewards can include verbal praise, a novel food treat that she doesn’t get any other time (almond slivers work well if your bird likes nuts, because they are small and can be given a little at a time without overfeeding) or a scratch on the head (if your bird likes this kind of physical interaction, as many do).

When these rewards are given immediately after the bird attempts to speak the word, she will pair hearing the word with receiving something positive and will likely repeat the word to get the reward. Some birds will even learn to say the word in context once they associate a certain environment with receiving a reward. This is an example of positive-reinforcement training — a process commonly used to teach animals new behaviors.

Ultimately, your bird will say the word without having to be prompted by hearing the word first.