Home ›
Our Pet Experts ›
Why Play Is Important for Kittens

Why Play Is Important for Kittens 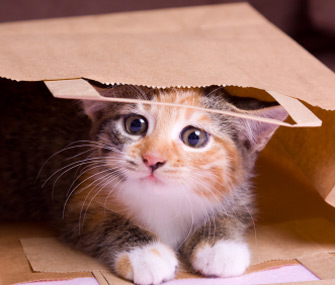 Kittens are known for their frisky behavior, running, climbing, pouncing and pawing. This play is actually a vital part of normal development, helping the young cat develop social, predatory and locomotion skills that adult cats in the wild would need.

When kittens are still with their mother, their play is centered around her as well as littermates. This social play teaches kittens to understand and communicate with other cats. Around weaning time, they begin to show interest in playing with objects, going through the stalking, chasing and pouncing motions that teach them how to hunt. They also use their paws to bat and swat at objects, developing their eye-paw coordination. By around 10 to 12 weeks of age, locomotory play, with running, climbing and leaping, is fully developed. Such play is important in developing agility and coordination. By this time they have a full repertoire of play behaviors, complete with play fighting, play killing and play escape behaviors — all behaviors essential for survival in the wild and, too, for a well-adjusted cat in your household. Play also helps shy kittens build self-confidence as they start to succeed in bringing down their quarry.

Kittens who are weaned too early often have long-term effects of growing up alone. If a playing kitten gets carried away and bites or scratches too hard, his littermate or mother will either quit playing or give a signal that the rough play was not appreciated, perhaps growling or giving a swat. In this way, the kitten learns to inhibit his bites and scratches so that play fighting doesn't damage playmates. Kittens without this education often grow up play fighting far too roughly and getting into fights when they didn't understand their playmate's signals to stop. If you have an orphan kitten, try to find some playmates for him. If that's not possible, you'll need to teach him not to play too roughly by stopping play when he gets out of hand. Simply say, "Ouch!" and stop the game when he gets too rough.

How to Keep Playtime Safe

Play helps burn off excess energy, which too often is directed into unacceptable behaviors such as climbing the curtains, knocking the collectibles off the table or launching themselves at the chandelier. As kittens get older, they naturally want to explore, which is another skill they'll need as adults. But unsupervised kittens can get stuck in small spaces, pull heavy objects down on them or even get trapped in the dryer or get electrocuted. That's why you need to not only prevent your kitten from playing in areas you can't watch him, but also entice him to play elsewhere by providing better things to explore, such as cat trees, perching posts, paper bags, tunnels and boxes. Cats who tend to chew can be given chew toys.