Why There Are Some Tricks You Shouldn't Teach Your Dog 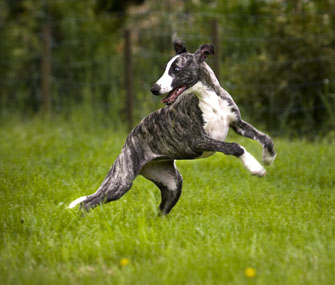 There's nothing cuter than a dog doing a trick — and, sometimes, nothing more annoying. Although it may not sound like a big deal for a dog to do a trick without a signal from his pet parent, it can actually be a major issue, depending on the dog and the trick. While a pooch performing a sit or a down out of context likely will not cause any problems, certain tricks, like jumping vertically in the air, spinning in circles, high fives or hugs and kisses, can create issues for you and your dog. Before you teach your dog a trick, it’s important to consider if the behavior will be appropriate should it ever appear out of the context of a training situation. Here are three real hazards of teaching your dog certain tricks and some strategies for keeping the trick from becoming a nuisance — or, worse, a danger.

Hazard #1: Your Dog's Trick Could Hurt Someone

Recently, a giant Standard Poodle greeted me on the first day of obedience class by sitting up on her hind legs in a begging position and flailing her front paws in the air, wildly attempting to paw my arms. Although this behavior may not be considered unruly in a small dog, this was a Poodle who easily stood shoulder height in a begging position and had saucer-sized paws. What started out as an innocent begging trick had quickly snowballed into a greeting disaster. Adding to the stress was the fact that the Poodle's owners frequently had senior guests over to their house. Their Poodle’s frenzied greeting had gone from a cute trick to a safety issue, as she could easily knock someone flat on the floor.

For the Poodle, as for other canines, this particular trick has become a way to get attention and treats. Although “cues” or “commands” are used to teach a dog when the trick behavior should take place, unless there has been extensive practice with those cues, the behavior will often occur out of context and without the cue being given. This can lead to a dog performing a trick without any signal, on his own initiative, for attention — as in the case of the flailing Poodle.

Hazard #2: Your Dog's Trick Could Scare Someone

While calmer behaviors like a stay on a mat may not be an issue when they are performed without a command from a human, extremely active tricks, or those involving close contact with a human, can escalate into a scary and dangerous situation for people and dogs alike.

Kisses and hugs, for instance, while cute, may be overwhelming to people who are timid around dogs and can be misinterpreted as a threat. A Pit Bull at a shelter was being trained by a young handler to give kisses; the dog was learning to touch the person’s nose with her nose whenever the handler put her face down by the pet. A trainer warned the handler that this particular trick was not appropriate for a Pit Bull in the shelter system, because although it was adorable, especially for such a gentle dog, it could be misinterpreted as a threatening gesture. In the case of the Pit Bull breed, this could easily be blown out of proportion because of breed stereotyping and could prevent a perfectly nice dog from being adopted.